Fury vs Joshua ‘the fight of a generation’ – Adam Smith

Tyson Fury vs Anthony Joshua is ‘the biggest fight of a generation’ according to Sky Sports Boxing chief Adam Smith.

The two British world heavyweight champions have signed on the dotted line for a two-fight deal. The first meeting is expected to take place in June or July, with a rematch then likely to happen in November or December.

The bout is likely to be showed by Sky Sports Box Office and BT Sport Box Office in the UK, and Smith is suitably hyped about the prospect.

“We’re certainly talking about one of the biggest fights of all time, aren’t we,” he told Sky Sports Boxing.

“We’re used to the waiting game in boxing, the unpredictability, the drama, the theatre of course. We know that Anthony Joshua and Tyson Fury sharing a ring at some point later in the year is one of the grandest fights.

“We’ve been covering boxing at Sky for some 30 years. We go back to Lennox Lewis fighting Frank Bruno in Cardiff in 1993. Of course the Bruno vs Tyson matches, Lewis vs Holyfield. We had Lennox Lewis and Mike Tyson – which was one of the biggest of all time – out in Memphis. 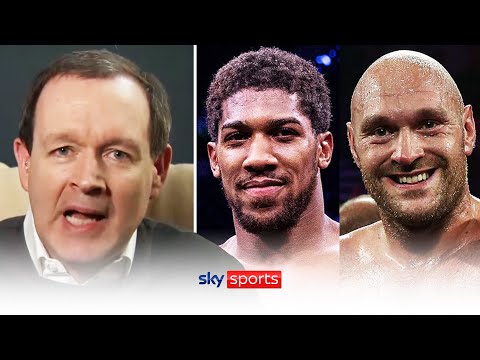 “We’ve seen Tyson Fury go over and beat Wladimir Klitschko, we’ve seen AJ and WK at Wembley – what a night that was. And of course last year we just saw Tyson Fury’s wonderful performance against Deontay Wilder, AJ comes back against Kubrat Pulev.

“The stage is set. They are the best heavyweights on earth. They are both British, they are totally different personalities and styles as we know. I think it will be probably the biggest fight we’ve ever seen.”

Now the two sides must finalise a date and a venue for the superfight – with the Middle East the likely summer landing spot.

Smith added: “We just have to wait on a venue, we have to wait on a date. But what we do now – what Eddie has announced today – is that both parties. Both Team Joshua and Team Fury have put pen to paper for a two-fight deal. They will meet in a ring. As I said we don’t know where.

“I think nine countries are in the possibilities. We think maybe it’s Saudi Arabia, but we’ve heard Singapore, America. Who knows, will the UK come back into it as restrictions begin to ease?

“We wait and see but I think probably in the summer maybe in the Middle East and then a rematch maybe back in the UK would be good wouldn’t it, at Wembley or at the wonderful Tottenham Hotspur Stadium where AJ was going to fight Pulev.

“It’s exciting times, it really is, and I’m so happy that both fighters have agreed to this. I’ve spoken to them both recently and I know AJ is already in training camp. It’s a fight that the world needs to see, and more importantly it’s the fight the fans have craved. To see who is better – Anthony Joshua or Tyson Fury.

“This is massively positive, and I think this means that the biggest fight of a generation will happen.”