Tyson Fury has Anthony Joshua to forget “undisputed bulls***” and “fight the fight that everyone wants to see”.

Fury and Joshua have agreed in principle the financial structure for a two-fight deal, but Joshua’s mandatory commitments risk either delaying a massive all-British showdown, or scuppering it completely.

AJ is due to fight IBF mandatory Kubrat Pulev on Saturday December 12 in London, and after that he may have to take on WBO mandatory Oleksandr Usyk. He currently owns the IBF, WBA and WBO straps and has long made it a career goal to become the undisputed heavyweight champion.

But Fury – who himself must face Deontay Wilder in their trilogy fight on Saturday December 19 – says the belts are overrated and he should think about what really matters, the biggest fight in British boxing history.

‘The Gypsy King’, speaking exclusively to Michelle Joy Phelps on Behind the Gloves, said: “See, all this undisputed bulls***, I’m not really too convinced about it. I’ve won every belt there is to win. And having another stack of belts that I already own, don’t really mean s*** to me. So rather than fight all these mandatories that he’s got, I’d say vacate all these belts and fight the fight that everyone wants to see.

“I ain’t running from you, I don’t care about you, I’ll go you through like a hot knife through butter. Come and fight the big boys, step up to the plate and get knocked out, then go fight all those easy guys.” 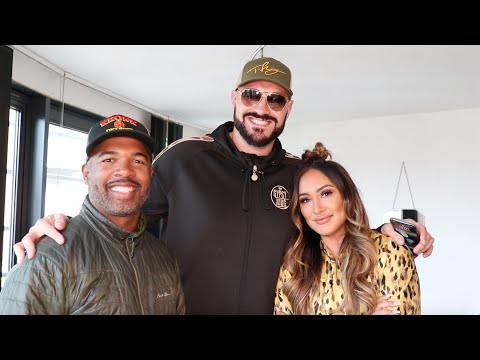 Fury knows a clash with Joshua is not only central to defining his ultimate legacy, but likely would also be the biggest payday of his storied career.

“No disrespect to Oleksandr Usyk, great fighter, cruiserweight champion and probably gonna be a heavyweight champion if he fights Joshua in the meantime,” he said.

Fury fears if Usyk (17-0) does get to Joshua before him, the slick Ukrainian southpaw could scupper the dream match.

Asked if Usyk would beat AJ, he responded: “Yeah, if they fight, but I bet they don’t. Because why would he fight Usyk and get paid like 10 percent of what he could make off ‘The Gypsy King’. Forget the belt, vacate it, let them boys fight for the vacant belt, whoever it is. Usyk and Parker. And then come and fight big-time.