Frank Warren confirmed there has been an offer made to stage a megafight between Tyson Fury and Anthony Joshua – but insisted there have been no negotiations as yet.

After a much-publicised Tweet from Mike Coppinger of the Athletic on Thursday – followed by Eddie Hearn’s interview with Sky Sports on Friday – had raised the excitement to fever pitch, Warren (who co-promotes Fury along with Bob Arum’s Top Rank) re-iterated that official talks cannot talk place for a very specific reason.

He told Boxing Social: “I keep reading all this stuff, the bottom line is this – it’s very simple. They’re both – Tyson and Deontay Wilder – contracted for their third fight. That’s a fact. That’s where we are at the moment.

“There’s been offers made from various countries and organisations to host the fight between Tyson and Anthony Joshua. One of these entities, these countries, we signed an NDA with, which I can’t go into. When I say me, I mean myself, MTK on the behalf of Top Rank and I know Matchroom has signed an NDA as well. So that’s where we are. Nothing is in writing, nothing has been offered at the moment except for one country that’s made an offer which we’re considering.

“As regarding anything concrete, nothing at all. Behind the scenes, there are offers being prepared and an offer being made. It’ll be up to all the parties to consider. Everyone has got to agree. If it was to go straight to the Joshua fight, Matchroom, the two fighters, Queensberry, Top Rank and MTK would all have to agree.” 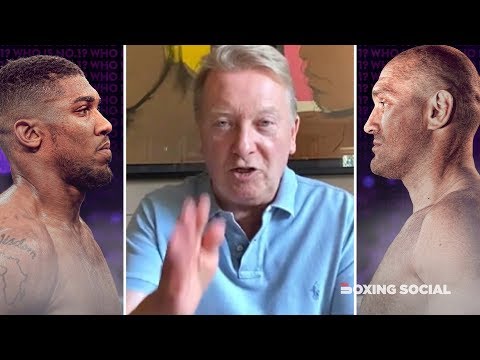 Coppinger claimed on Twitter on Thursday that talks were ongoing with a view to Wilder potentially stepping aside to allow Fury to move on to Joshua, but Warren said: “If there was a step aside then Shelly (Finkel, Wilder’s manager) would have to agree and Bob Arum would have to agree with Pulev. The truth of the matter is there is nothing to report there. All there are is talks about trying to put something together. We’ll see when that offer is made, then once that’s there, we can start negotiating.”

When asked if he thought Wilder might eventually step aside, Warren explained: “I don’t know at the moment. It’s all about money at the end of the day. I speak to his manager Shelly Finkel every other day, he’s a great friend. We haven’t had that conversation yet. It’s not a conversation that has even been had yet.”

Warren explained the complex nature of the negotiations needed to make Fury vs Joshua happen: “Our side of the table is Top Rank, MTK and Queensberry – so each of us has got a designated role in what we do. I have no relationship with Matchroom, so that is being dealt with by via MTK’s representative, so they’re talking to him. Regarding a couple of the venues/countries, I’m talking to them. Regarding some of the other situation as to putting the promotion on, Bob Arum’s dealing with it. We are all as one – the three of us are all on the same page. No-one is doing any back-dooring, there’s going to be no trying to drive wedges. We are all as one dealing with this.

“To get this over the line – if we’re going to get it over the line – everybody but everybody has to agree. It’s not down to one person, that’s how it is, it’s for all of us to agree the situation. And more importantly for the fighters to agree – because they’re the guys getting in the ring.”