Tyson Fury vs Dillian Whyte has already sold out the 90,000 capacity Wembley Stadium, but what numbers will the PPV (pay-per-view) produce?

Estimates from promoters put the potential figure at anything up to 1.5million buys in the UK alone – which would be around the record level set previously by Anthony Joshua on Sky Sports Box Office.

Fury vs Whyte will air as a PPV on BT Sport Box Office and now the question is whether Dillian’s silence so far during the promotion will help or hinder the eventual numbers. His brother Dean believes it might be the latter, as he detailed in an interview with IFL TV on YouTube.

He spoke of the bad blood between the Fury and Whyte camps dating back to purse bids and reaching a peak this week with that amazing row on talkSPORT between Frank Warren and Whyte’s lawyer Jeff Benz.

“Now you’ve upset the applecart and Dillian’s not doing anything at the minute as we can see. So we’ve going to have the possibility that your pay-per-view numbers are going to be very very low probably. 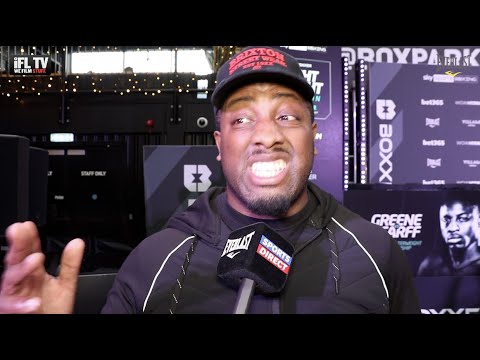 “If there’s no hype, we know that Tyson Fury’s a mouthpiece – he’s great at what he does – but is he just going to talk everybody to death? Just him talking? Or maybe talking to John Fury, that might work – him and his old man doing it and the gang. They do a great job, I’m not gonna lie, they’re getting the numbers in, but I mean is that enough? Does that sell the fight? Just them talking among each other.

“If it was Dillian Whyte talking and them all having their bit to say going back and forth I’m sure that would sell the fight truly in great fashion. You should have respect and treat the challenger and  the champion equally with the respect they deserve.”

There is a counter view of course to Dean’s – perversely that Whyte’s silence and the frostiness between the camps could actually INCREASE interest. Dillian’s no-show at the initial press conference – described by Warren as “madness” – certainly caused a stir.

Then came that astonishing radio row on Friday which again put the fight squarely in the UK headlines – trending all day on Twitter.

Of course April 23 will be the proof of the pudding, when we’ll find out whether Whyte’s silence helps or hinders the eventual numbers. What’s your bet?