Tyson Fury vs Dillian Whyte is now just three days away, and you can watch the final press conference live this afternoon.

Fury (31-0-1) and Whyte (28-2) should come face to face for the first time in the promotion ahead of their massive rumble in front of more than 94,000 fans at Wembley Stadium on Saturday night. 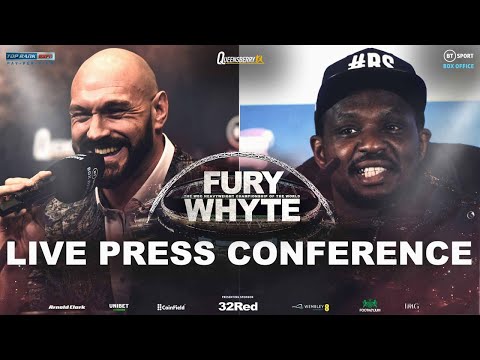 Ever since Frank Warren’s Queensberry Promotions beat out Eddie Hearn and Matchroom to win the purse bid (thanks to a record $41million offer) to stage this bout, the promotion has been beset by controversy.

Whyte was clearly unhappy about his side of the deal (despite being in line for a career-best purse of around $8million), and he failed to show at the opening press conference to announce the bout. He was also missing when Tuesday’s open workout went down, but has done some media interviews in recent days.

What is on the line in Fury vs Whyte?

Fury’s WBC, Ring magazine and lineal heavyweight titles are all up for grabs on Saturday night. The winner also is likely to be in a position to face the winner of Oleksandr Usyk vs Anthony Joshua 2 in a massive unification fight later this year.

The last undisputed heavyweight champion of course was another Brit Lennox Lewis. He claimed all the belts way back in November 1999 by defeating Evander Holyfield in Las Vegas.

How much is the Fury vs Whyte PPV?

Depends where you are of course…

ESPN has the call in the United States with the bout currently retailing at $69.99.