Tyson Fury came in surprisingly light when the weights were announced for his world heavyweight title defence vs Dillian Whyte on Saturday night.

‘The Gypsy King’ was a huge 277lbs (19st 11lbs) when he last fought, that epic 11th-round KO of Deontay Wilder in their trilogy match in Las Vegas last October. He had been 273lbs for their second fight in February 2020.

On Friday though Fury tipped the scales at just 264lbs (18st 12lbs) – almost a stone lighter than he had been for that third meeting with Wilder.

Whyte meanwhile was heavier than for his last fight as he showed up on time for the weigh-in. He had been 247lbs for that demolition of Alexander Povetkin in their rematch in Gibraltar in March 2021. But on Friday he was six pounds heavier at 253lbs (18st 1lbs). 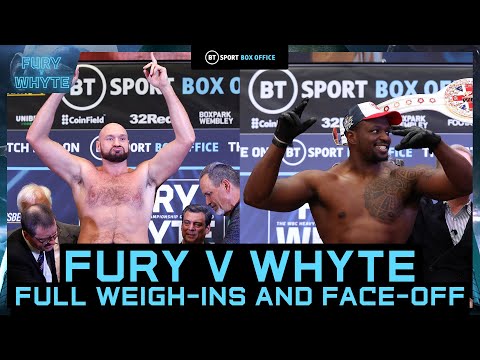 Fury will start a strong betting favourite on Saturday night – he is currently trading as a 1/6 shot with UK bookmakers while Whyte is very much the outsider at 4/1. The Draw is trading at 33/1.

Ring walks for the fight are expected to be shortly after 2200 UK time on Saturday, that’s 1700 Eastern Time in the United States.

Fury vs Whyte of course is a pay-per-view fight on both sides of the Atlantic. BT Sport Box Office will air the fight in the UK at a cost of £24.95, while it will cost $69.99 to watch the bout on ESPN in the United States.

What’s at stake on Saturday night?

The WBC, Ring magazine and lineal world heavyweight titles – all currently held by Fury – will be on the line on Saturday night. The winner will also be in line for a potential undisputed showdown with the winner of Oleksandr Usyk vs Anthony Joshua 2. That bout is likely to take place in July.