Cancel Fury vs Wilder 3 and give Whyte his shot – Hearn

Eddie Hearn has called for Fury vs Wilder 3 to be cancelled if it is further delayed to February 2021, with ‘The Gypsy King’ taking on Dillian Whyte instead.

Bob Arum revealed earlier this week that the trilogy fight – which had been initially planned for July and then October – could be pushed back yet again from the current preferred slot of Saturday December 19. This after the NFL”s Las Vegas Raiders announced that the likely venue – their brand-new Allegiant Stadium – will be closed to fans for the entirety of the 2020 season.

Arum said: “If we can get going with a limited audience we’ll go on December 19th. If not, we’re talking to another location outside of the United States, and it’s not in the Middle East, about doing that fight the first week in February.”

Hearn’s response to Arum’s comments, when interviewed by IFL TV, was to again state the case for his man Whyte (the WBC mandatory contender for more than 1000 days now) finally getting his shot as stipulated before the end of February 2021.

“I think that Dillian Whyte should be enforced immediately as the mandatory for Tyson Fury. Now we’ve already got a deadline for the end of February, why can’t they do the fight?

“Yes we know there’s a pandemic, but Joshua’s fighting, all the other major fights are gonna take place. So I don’t see how that’s even an argument.”

While Arum has said there is no way Fury vs Wilder 3 could take place behind closed doors (the rematch at the MGM Grand in February 2020 brought in a heavyweight-record live gate of almost $17million), but Hearn believes Fury vs Whyte is big enough from a pay-per-view perspective to succeed without fans.

He explained: “We could do Dillian Whyte against Tyson Fury now, we could do it on pay-per-view. It’s a monstrous fight, does 1.5million, 2million buys (the current British record is 1.6million for Joshua vs Ruiz Jr 2). We could do it anywhere. Saudi, here (Fight Camp).

“You do (want a gate) but the pay-per-view numbers are huge for that fight, so that’s a big fight, so why not do that now?” 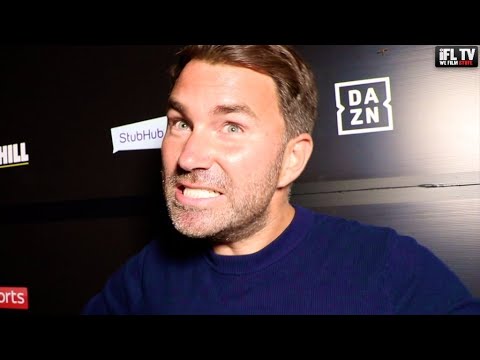 Whyte of course puts his dreams on the line against dangerous Russian Alexander Povetkin (35-2-1) behind closed doors at Matchroom Fight Camp on Saturday August 22 (live on Sky Sports Box Office).

And ‘The Body Snatcher’ and his opponent have received a big boost ahead of that bout with the news they will now not have to quarantine for 14 days upon arrival in the UK.

Hearn revealed: “Yesterday we got special dispensation from the Government to allow an elite athlete exemption for Dillian Whyte, Alexander Povetkin, Delfine Persoon – which is good news because they put a quarantine on Belgium yesterday – and Katie Taylor. So now they only have to come in seven days before. Povetkin was due to arrive tonight or tomorrow and now he comes next Saturday.

“Big news for them, you’ve been in the bubble, 14 days in there can do all sorts to you.”

Hearn is excited by what Whyte will bring to the table on August 22, and says he is in great shape as he joins forces with new trainer Xavier Miller following the recent split with Mark Tibbs.

He said: “They’ve worked well together. I think Dillian really knows what he’s doing. He’s really been a guy who has impressed me in terms of his training. His camp in Portugal has been incredible – he’s in unbelievable shape.

“He’s happy and that’s all that mattters, and I think as long as his head’s in the right place I think he’s gonna do a job on Alexander Povetkin. I think he’s gonnna make a major statement.”