The weigh-in for Tyson Fury vs Deontay Wilder 3 produced a pre-fight surprise as both mean posted the heaviest weights of their careers so far.

‘The Gypsy King’ and ‘The Bronze Bomber’ tipped the scales on Friday in Las Vegas ahead of their trilogy showdown at T-Mobile Arena on Saturday night.

Fury came in at 277lbs (19st 11lbs) – four pounds higher than for his rematch demolition of Wilder – also in Vegas – in February 2020. This one does come with an asterisk though, as he was wearing a hat, a vest, trousers and trainers. 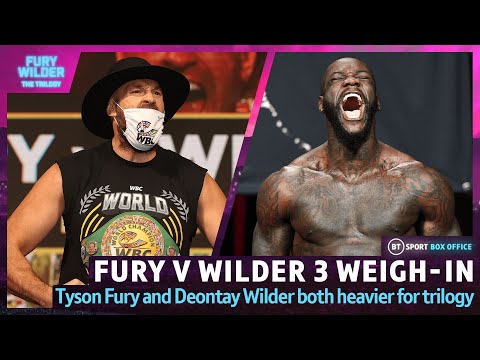 Wilder meanwhile has clearly bulked up since scaling 231lbs for that first ever professional defeat at the hands of Fury in 2020. He is now seven pounds heavier at 238lbs (17st).

While, at the instruction of Fury’s co-promoter Bob Arum there was no customary face-off or staredown, both men were interviewed after weighing in. And Fury was full of menace, clearly itching to get back into the ring after that 20-month wait.

“It means total obliteration of a dosser. Total annihilation, that’s what it means to me. I’m gonna put him in the Royal Infirmary, after this fight, don’t worry about that.”

When asked what Wilder’s new trainer Malik Scott might bring to his charge, Fury was withering in his response.

“Look at the state of him now, his heart’s rattling now, his balls have sunk up inside of him.”

Wilder meanwhile explained why he had bulked up to his heaviest ever weight, in a bid to mitigate Fury’s size advantage.

“The weight just came on. I wanted to look sexy and feel sexy, I taste sexy as well. I’m bench-pressing  a little over 350 so whatever weight he comes in, I can lay on my back and lift him.

“So there won’t be that rushing me and putting all his weight on me and different things like that. It was a joyful camp and a loving camp. We had a great time.”