Ricky Hatton has no wish to see Tyson Fury vs Deontay Wilder 3 – he would much rather see ‘The Gypsy King’ take on fellow Brit Dillian Whyte instead.

Whyte (27-1) has been the mandatory contender for Fury’s World Boxing Council (WBC) heavyweight title for what seems an eternity – and apparently now finds himself a victim of boxing politics.

‘The Body Snatcher’ is supposed to get that elusive shot at the title before the end of February 2021 against the winner of Fury’s contracted trilogy fight with Wilder. But there is also the huge clamour for an all-British unification showdown between Fury (30-0-1) and  Anthony Joshua (23-1) next summer.

“But Dillian Whyte – who has earned his dues – he’s a British fighter, it would be a Brit fighting a Brit again. Dillian’s confidence is sky high, Tyson’s is sky high. That’s the fight for me, but if a contract has been signed, poor Dillian is gonna have to just hold his horses unless something can get sorted out.

“I’d rather – no disrespect to Deontay Wilder – I’d rather see Dillian fight Tyson than the third Wilder fight – all day long – I think everyone would.” 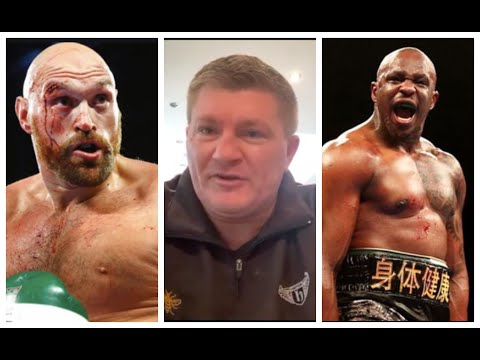 Fury and Whyte have thrown several virtual bombs at each other on social media in recent weeks, and Hatton says the latter’s frustration at the situation is entirely understandable.

“Tyson’s Tyson you know, and it’s not Tyson’s fault why Dillian has not got his shot. I think it’s more politics than anything. I don’t think Dillian’s having a pop at Tyson because who can have a pop at Tyson with what he’s done?

“I think it’s just frustration on Dillian’s part, which I think Tyson would probably say himself he totally gets. Dillian seems to have been waiting for ever for his shot and now it looks like Tyson might be having to do another Wilder fight, which means Dillian gets put on the back burner.

“I’m a British fight fan – Dillian knocked out my heavyweight Lucas Browne with a great performance (in March 2018) – and that should have been you know the springboard that catapulted him onto the world scene. And I know he’s on the world scene but he’s still sat on f***ing third base, isn’t he the poor sod. It has been interesting but I think Dillian needs to keep doing things like that. Tyson won’t take offence, Tyson loves all that stuff. I think he needs to air his frustration – we all agree with him.”

While Fury is preparing for that trilogy fight with Wilder, Whyte will also remain active by fighting former WBA heavyweight king Alexander Povetkin (35-2-1) at Eddie Hearn’s Matchroom Fight Camp on Saturday August 22 (live on Sky Sports Box Office pay-per-view in the UK and on DAZN in the United States).