Frank Warren was far from impressed when Eddie Hearn revealed that contracts for Tyson Fury vs Anthony Joshua are now signed – describing the move as “a bit silly”.

Hearn told ESPN’s Mark Kriegel on Monday that the two current world heavyweight champions have signed a two-fight deal to unify the titles. This despite the reported fact that all parties had signed an agreement to stay quiet until they could announce the fight jointly.

Warren told BT Sport Boxing: “It’s a surprise to myself and Bob Arum and everybody that anything came out. We signed an agreement all of us that anything that did come out we would do jointly. It was of the view that nothing should come out until the venue is nailed down.

“Eddie Hearn put it out there and he shouldn’t have done that, but he’s done it. In the meantime there is nothing else to say – I cant say anything because if I sign an agreement I abide by the agreement, as does everybody who is involved in it. 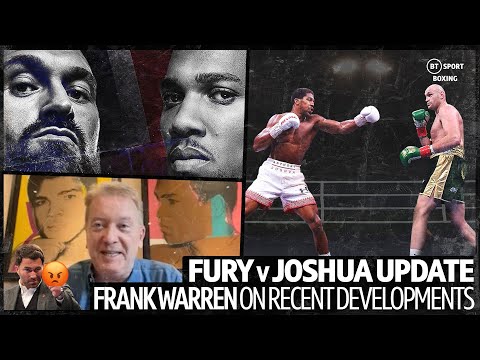 “More importantly we still haven’t got the venue sorted out. There’s a lot of interest but the venue’s not been finalised – so we are where we are.

“It’s been signed and it’s out there and there’s nothing I can do about that. It was a bit silly to do that but sometimes people think they’re more important than the fight.”

Since Monday Kriegel has further reported that the clock is now ticking on a 30-day deadline from last Saturday to finalise a venue for the fight.

Warren said: “Finding the venue is paramount and that’s what we’re all working towards. What we don’t want to be doing is doing what we’re all doing now – talking about this.

“When you’re negotiating with people you want to do that privately, from a position of strength, not from weakness. We’re all working on it – hopefully we’ll get it over the line.”

Warren re-iterated that the desire is still to have the first fight in June or July (the rematch would likely take place in November or December). He said having fans there is also what all parties want.

“It’s gonna be very important that the fight has fans there for a number of reasons. One is obviously the financial aspect, but obviously you want the atmosphere of fans being there for a fight like that.

“Everybody’s working to get it away in June or July. The longer it takes to happen, it’s not gonna be good for Tyson. He’s been out of the ring for 13 months, coming up to 14 months. He’ll wanna be fighting and we want to get it on ASAP.”

At present the bout is expected to take place outside the UK due to COVID-19 restrictions. The Middle East remains a hot favourite. Both men are expected to earn around $100million each for their night’s work.