Joe Calzaghe believes Tyson Fury should start favourite for a showdown with Anthony Joshua, and can’t wait to see the British pair get it on inside the ring.

Calzaghe was himself a British great who claimed world super-middleweight belts and the Ring magazine light-heavyweight title in a stellar professional career which ended with a perfect 46-0 record. And perhaps his finest hour was a brilliant performance to defeat highly-rated Dane Mikkel Kessler in their superfight in front of more than 50,000 at Cardiff’s Millennium Stadium in 2007.

Now Calzaghe can’t wait to see the latest generation of British boxing greats to engage in a massive event, telling BT Sport: If they fought now I think Tyson Fury has to be the favourite – judging on ‘you’re only as good as your last fight’. Don’t get me wrong, AJ is a top fighter as well, and that’s a fight I really want to see down the line. It would be fantastic for the British fight fans to see Fury against AJ. And how amazing is that for British boxing, to have two of the top heavyweights in the world from Britain?” 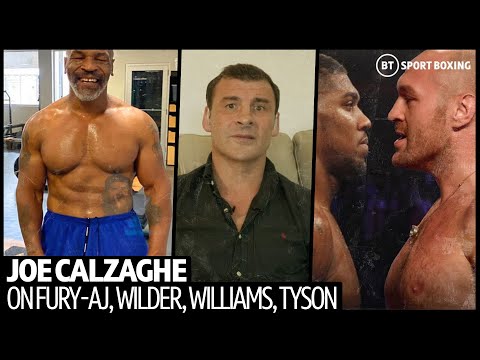 Calzaghe – who was being interviewed by respect journalist and broadcaster Steve Bunce – was asked who he thought would come out on top in a mini-league of the three top heavyweights, Fury, Joshua and American Deontay Wilder.

“I think Tyson Fury. I was so impressed after his last win against Deontay Wilder,” said Calzaghe. “He showed he could adapt his skills and change his style during a fight. Last time he showed punching power, how he backed the guy up.

“So I think he’d just edge it, with AJ a close second and Deontay Wilder – although he’s a big puncher – I just believe that he’s not as good as the other two. He showed his vulnerabilities when he got knocked out by Tyson Fury. And I think if they fight again – when they fight again – the same will happen.”