Skip to content
Fury vs Joshua News Joshua on Wilder: He told the world he ducked me

Joshua on Wilder: He told the world he ducked me

Anthony Joshua is taking the positives from the astonishing sound bites coming from Deontay Wilder in recent days – namely that ‘The Bronze Bomber’ ducked him.

Wilder was reportedly made an enormous offer by DAZN in early 2019 to take on Joshua for the undisputed world heavyweight title. At the time Wilder was WBC king while AJ held the IBF, WBA and WBO straps.

For whatever reason, the fight did not happen, leading to recriminations and claims from both sides.

Eddie Hearn says he couldn’t even get a meeting with Team Wilder, and Deontay’s recent comments appear to back up his and Joshua’s claims. The American (42-1-1) said he gave Tyson Fury a rematch instead of fighting Joshua.

Joshua on Wilder: he admitted he ducked me

AJ, who defends his titles against Kubrat Pulev on December 12, says he’s delighted things have been cleared up.

“The positive out of it? He told the world that he ducked and dodged me,” he told Sky Sports.

“We offered him a fight for the undisputed championship of the world and he went down the route of fighting Fury.

“I’m glad we can clear that up and move on.

“As time goes on, it will all come to fruition and make sense.”

Wilder has made several outlandish claims to explain his crushing defeat by Fury in February. That seventh-round stoppage was the first loss of his professional career.

Joshua has been unimpressed by how the former WBC champion is expressing himself, but says that may change with time.

“He is trying to express how he feels to the world. He has left it to us, the masses, to interpret it how we feel is best.

“How he feels today might change in a year or two years due to experiences or more understanding of the situation that he has gone through.

“He was knocking everybody out and got used to a winning performance. He took a loss and isn’t used to it.

“As time goes on, he may express himself differently.

“Today? In my humble opinion it isn’t coming across in the right way.” 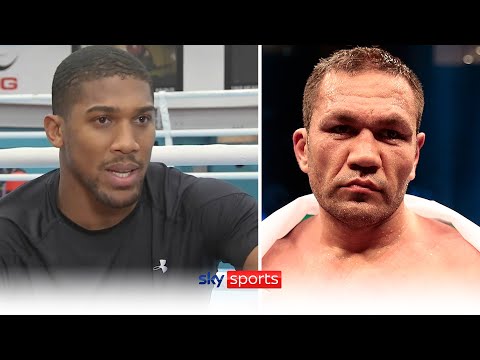 Joshua vs Pulev will take place at London’s O2 Arena on Saturday December 12, with the Sky Sports Box Office pay-per-view costing £24.95. AJ knows that a victory should set him up for a massive unification match against Fury next summer.