AJ would fall to Fury in 8 says coach Andy Lee

Tyson Fury would easily defeat Anthony Joshua if and when they finally meet inside the ropes, according to Fury’s coach Andy Lee.

Lee, himself a former WBO world middleweight champion, agrees the two heavyweight kings would provide a mouthwatering matchup to unify the titles. But he can only see one winner.

“I think (Joshua) is still an improving fighter,” he told The Boxing Show on Sky Sports. “A little bit of inexperience and mentally he’s not as strong as Tyson. I think Tyson would beat him in eight rounds. I like Anthony Joshua, I think he’s a great fighter, a great champion.

“I still think it’s a great fight and a great match-up and it’s the only real match-up in the heavyweight division left for both guys, but I think Tyson wins in a similar fashion to what he did to Wilder.” 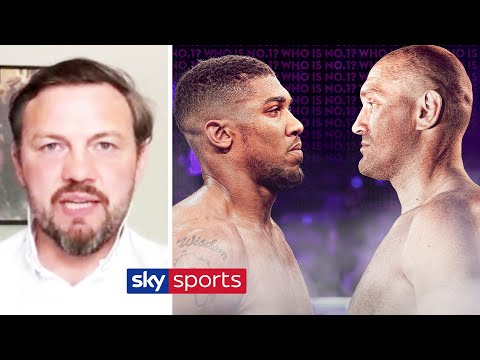 There was surprise in some quarters when former WBC king Wilder immediately exercised his contractual right to a third fight with Fury, having been stopped inside seven rounds in their Las Vegas rematch in February. And Lee thinks given the nature of that destruction, Wilder might be wise to just wait before getting back in with ‘The Gypsy King’.

“Everything is in open play again, whatever fights were made before the lockdown kind of become null and void in that everything is up for renegotiation again. If I was in Wilder’s team, I would say ‘take another fight, maybe Andy Ruiz or somebody else, and get a win, get your confidence back up and try to improve then come back and fight Tyson again for the trilogy’.”

If Fury vs Wilder 3 does happen later this year – once the COVID-19 pandemic subsides and Wilder recovers fully from a bicep injury – Lee expects another emphatic victory for his man.

“If they fight again, I can only see it going the same way, if not even more emphatic for Tyson.”