Joshua vs Pulev confirmed for December 12

Anthony Joshua vs Kubrat Pulev has been confirmed for Saturday December 12 at London’s O2 Arena.

Joshua (23-1) will defend his IBF, WBA and WBO world heavyweight titles against the 39-year-old Bulgarian (28-1). It will be Joshua’s first fight for just over a year. He last fought in a rematch victory over Andy Ruiz Jr in Saudi Arabia in December 2019.

It is also Joshua’s first fight in the UK since September 2018, when he stopped Alexander Povetkin at Wembley Stadium.

The bout will be screened live on pay-per-view by Sky Sports Box Office in the UK and by DAZN in its nine markets – the United States, Canada, Germany, Japan, Italy, Spain, Brazil, Switzerland and Austria.

Joshua, who knows victory will likely set up a blockbusting clash with Tyson Fury next summer, said: “December 12 is the date and once again the heavyweight belts go up in the air and it is my sole focus to make sure that come December 13 they are in their rightful place in the UK. 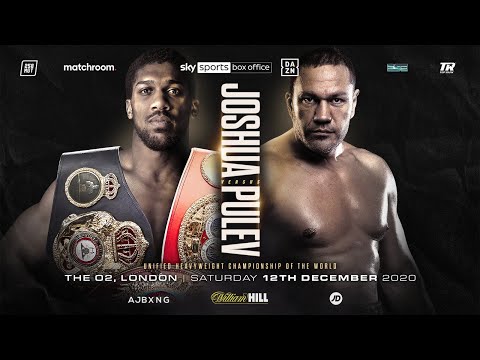 “The O2 is the original lion’s den, I have a lot of history with the arena, but without the fans something huge is missing. I am really hoping that, safety permitting, we might be able to bring some boxing fans in, but we will have to see.  I respect every opponent and I respect Pulev. I wish him well during his preparation.”

“For a small country of Bulgaria to stand up for the heavyweight titles is a great accomplishment,” said Pulev.

“This fight is for my late father and all Bulgarians around the world! I’m coming to London to seize the heavyweight championship of the world.”

“After a challenging year for everyone, to end with the unified world heavyweight championship is very special,” said Matchroom supremo Eddie Hearn.

“Over a year after regaining his crown, Anthony Joshua takes on yet another dangerous opponent in mandatory challenger Kubrat Pulev. AJ’s resume is unrivalled, and this is the final hurdle until we challenge for the undisputed crown next year.

“Whilst it’s unusual to think of an AJ fight without tens of thousands of fans in attendance, we will be doing everything we can to lobby for the safe return of fans to this event, we have to move forward together. I know Team Pulev and Bob Arum will be doing all they can to become world champion on December 12 but AJ constantly evolves and improves and I expect a dominant performance and a spectacular KO to close out 2020.”

Joshua vs Pulev adds to a stacked heavyweight schedule in the final quarter of 2020, with most of the leading fighters set to be in action. Fights include Oleksandr Usyk vs Dereck Chisora, Alexander Povetkin vs Dillian Whyte 2 and Tyson Fury’s December 5 London date.