Skip to content
Fury vs Joshua News Joshua vs Usyk tips: 22/1 for the closest of calls

Joshua vs Usyk tips: 22/1 for the closest of calls

Anthony Joshua vs Oleksandr Usyk is boxing’s biggest fight of the year so far – and we have expert tips and predictions for the IBF, WBA and WBO world heavyweight title showdown in London on Saturday night.

After a 2021 which has promised much but delivered precious little in the unpredictable world of heavyweight boxing, finally we get a fight on Saturday evening.

Anthony Joshua v Oleksandr Usyk. Tottenham Hotspur Stadium. 65,000 fans. Live on Sky Sports Box Office in the UK and DAZN in the United States.  The bone-jarring poster boy of British boxing versus a maverick ‘pound-for-pound’ star from the East.

Make no mistake (and never mind the odds) Usyk is a genuine threat to AJ and this fight could be a thriller. A classic match-up between devastating puncher and uber-slick boxer. Two Olympic gold medallists and pro belt collectors going at it for Joshua’s WBA, IBF and WBO straps.

He has his critics, but AJ has crafted a fearsome reputation for his dedication to the noble art, his athleticism and dynamite power. He’s had to do a lot of learning on the job but this will be his 11th world title fight and the wildly-popular Londoner does crazy PPV numbers. The whole world wants to see Joshua v Tyson Fury but Usyk could put a huge spanner in the works this weekend.

The Ukraine southpaw is 18-0 and was previously a unified champion at cruiserweight.  The 34-year-old has so far defeated a poor Chazz Witherspoon and game but over-the-hill Dereck Chisora at heavyweight. He wasn’t at his mercurial best in either fight, but that doesn’t mean he can’t go through the gears on Saturday. 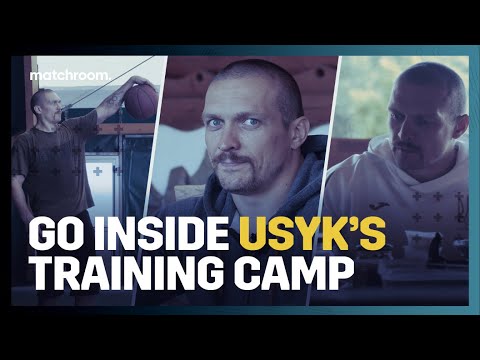 Usyk has talent to burn. Speed, movement, ringcraft. And an insatiable desire to emulate Evander Holyfield and scale the peaks of the heavyweight class after clearing out cruiserweight. There is a school of thought that Usyk at 6ft 3ins is somehow not big enough to tango with Joshua. The Londoner is three inches taller and size would give Joshua an advantage if there’s a firefight in north London. However, size would also make AJ more vulnerable in the sense he is less mobile and this fight might actually come down to who adapts best in the heat of battle.

Of the two, AJ is not as mobile as his Eastern European opponent is and has shown vulnerabilities in a couple of his fights to this point. Nobody who saw it will ever forget how he came apart against Andy Ruiz Jr in June 2019. Usyk is taller and has a longer reach than the Mexican-American, so to say he is too small to compete this weekend is a nonsense. This is a fighter who has previously sparred rounds with Wladimir Klitschko and not looked out of his depth.

He may not possess Deontay Wilderesque one-bomb power, but he can get Joshua’s respect if he lands clean. And anyway, Usyk has the Kryptonite for these big men with his sublime footwork and quick hands. He is fleet-footed and defensive-minded, but is one of those rare fighters who always seems to be in the correct position in the ring to launch an attack. It doesn’t hurt that he has Anatoly Lomachenko, father of the great Vasyl, training him either.

I make him a live underdog here and feel the 9/4 quotes about him dethroning Joshua are pretty big. However you cannot rule out a fighter with the power and cojones Joshua possesses. For everything we do know about Usyk, we simply don’t know how he’ll cope if he’s caught with one of those monstrous Joshua uppercuts or straight rights down the pipe.

Joshua (24-1) is the living embodiment of a modern-day heavyweight, but he is quick and explosive with it. He’s also dedicated to the game. A man who once said “Boxing is the embodiment of who I am, but beyond that, this is a journey of the self, and my obsession to get the most from this short life”.

It was once said that 10,000 hours of “deliberate practice” are needed to become world-class in any field. AJ was a relative novice when he won gold at London 2012.  But he’s grafted and grafted and is now reaping rich rewards as one of the most recognisable figures in world boxing and sport.

He weighed just over 240lbs for his win over Kubrat Pulev last December while Usyk, ‘The Cat’, was more than 20lbs lighter two months before that in easing past Chisora via decision. All the pictures and videos of AJ in the run-up to this suggest he has slimmed down, and this could be due to his tendency to fade alarmingly in the mid-rounds of fights after an electric start.

What does he do if Usyk is still there after four rounds and starting to take control in ring centre? AJ has the mental toughness but possibly not the fistic dexterity to outbox and outfox a master craftsman.

In terms of picking a winner, if everything were on the level, I would rate Usyk as a pretty confident pick at 9/4 given his skillset. However, you cannot ignore the fact that the fight is happening in London. Controversial decisions are happening with alarming frequency in UK rings these days and the worry is Usyk won’t get a fair shake even if he puts on a masterclass (he is 4/1 to win by decision or technical decision).

Joshua is fresh from signing a new deal with Eddie Hearn this week and is Matchroom’s cash cow. If it’s remotely close on Saturday, then the smart money is surely only on one man getting his hand raised. I don’t see AJ skittling Usyk over early. Much more likely, we will see a tactical battle between two proud gladiators. I can see Usyk displaying his full repertoire of skills but a raucous London crowd cheering every Joshua jab, hook and right cross. The ending might be controversial, and with this is mind I wouldn’t put anyone off having a small nibble on Joshua to win by split decision at odds north of 20/1.