Anthony Joshua vs Oleksandr Usyk is boxing’s biggest fight of 2021 so far, and you can watch a live stream of the weigh-in on Furyjoshua.com later today (Friday September 24).

The eyes of the fight world will all be on London when the two combatants step onto the scales, as the results are one of THE key sub-plots to a fascinating showdown.

When Joshua and Usyk last fought, there were more than 20lbs between them – later today it is expected to be much less.

Joshua appears to be much lighter than he was for his defeat of Kubrat Pulev last December, while Usyk appears to have beefed up since that points win over Dereck Chisora last October.

When is the Joshua vs Usyk weigh-in?

The weigh-in is due to start around 1300 UK time on Friday September 24. That is 1400 in Central Europe, and 0800 Eastern Standard Time in the United States. If you are on the West Coast of the United States, you’ll need to set your alarms for 0500.

Watch the Joshua vs Usyk weigh-in on live stream

That’s easy, you can watch it right here on Furyjoshua.com – just click on the video window below and you are good to go. 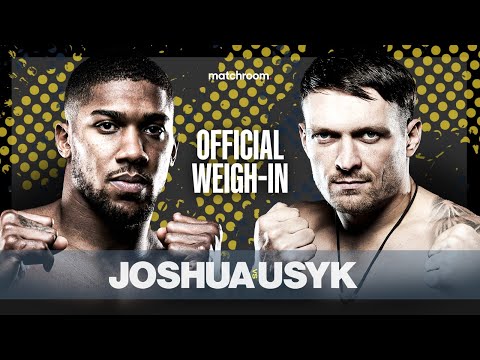 Our boxing expert has previewed the big fight and he has a 22/1 tip for the huge showdown at Tottenham Hotspur Stadium.

When are ring walks for Joshua vs Usyk?

What is at stake in Joshua vs Usyk?

Joshua currently holds the IBF, WBA and WBO world heavyweight titles and all three will be on the line on Saturday night. Then of course the winner is potentially lined up for a unification match with the winner of Tyson Fury vs Deontay Wilder 3 (October 9 in Las Vegas).