Hearn talks up Joshua vs Whyte for undisputed title

Eddie Hearn has talked up the possibility of Anthony Joshua and Dillian Whyte locking horns for the undisputed world heavyweight title next year.

Whyte (27-1) faces Alexander Povetkin (35-2-1) at Matchroom Fight Camp in Brentwood, Essex on Saturday August 22 (live on Sky Sports Box Office pay-per-view and DAZN) with his status as mandatory contender for the WBC world heavyweight title on the line.

‘The Body Snatcher’ has been waiting more than 1000 days for his title shot, but the WBC ratified earlier this week that he will finally get his chance against the winner of Tyson Fury vs Deontay Wilder 3 (which will hopefully take place on Saturday December 19).

While Hearn admits that the February deadline initially set for Whyte’s title shot is now unlikely due to the shifting timelines caused by the ongoing COVID-19 pandemic, he says it must happen, and adds that a rematch of AJ-Whyte is the obvious solution if Fury wants to vacate the title.

He told IFL TV: “It’s (Whyte vs Povetkin) the most important heavyweight fight this year by a mile. Alexander Povetkin can bowl in and become mandatory, just by winning this fight. Dillian Whyte’s waited a thousand days! This is everything on the line.

“Mauricio Sulaiman has made it ultra-clear.  The winner of Fury against Wilder has got to fight Whyte or Povetkin, or vacate the belt.

“So If Fury wants to vacate, and Dillian Whyte fights 1 v 2 for the title, he can fight AJ for undisputed.” 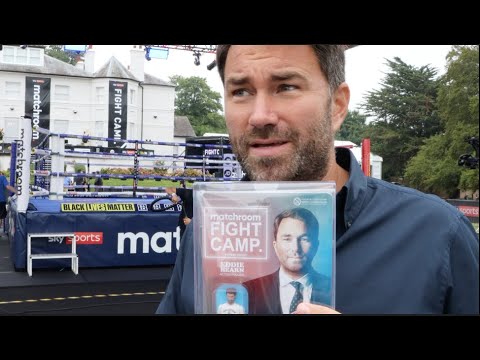 Joshua and Whyte of course met when both were undefeated and up-and-coming heavyweight prospects back in December 2015, producing a tremendous domestic scrap at London’s O2 Arena. Joshua prevailed by stopping Whyte in Round 7 having been badly hurt in the second by one of those trademark left hooks from ‘The Body Snatcher’.

Joshua will be on hand when Whyte vs Povetkin goes down next weekend, and while COVID restrictions mean they shouldn’t get too close to each other, it just adds to the pure theatre and explosive nature of the occasion.

“Think they’ve both said they’ll slap each other,” said Hearn.

“Josh won’t be able to get through there because he’s not in the bubble, so he’s out the way. We don’t want them rolling around together. But we’ll see. Next week you’ve got Dillian Whyte, Alexander Povetkin and Anthony Joshua here within 20 feet of each other. It’s gonna be a mental week.”

Hearn meanwhile re-iterated that Joshua’s next defence of his IBF, WBA and WBO belts – against IBF mandatory Kubrat Pulev (28-1) – will take place in December. He hopes the venue will be a full O2 Arena in London – COVID-19 permitting.