Hearn has said there is the potential for AJ’s mandatory defence of his IBF, WBA and WBO belts against the 39-year-old Bulgarian to take place in front of a VIP crowd of around 1,000 at either the Royal Albert Hall of Olympia.

Promoter and former HBO executive DiBella – always a respected voice for his views on the state of the fight game – responded positively to the idea, saying people like Hearn need to be creative as the sport looks to come out of the hiatus enforced by the current COVID-19 pandemic.

“I see the Pulev fight, social distancing, tables, fine champagne, nice wines, safe service, and a room where maybe you can put 1,000 people in a room and distancing, and people are socialising with their own groups that they’re already been quarantine with,” DiBella told Seconds Out. 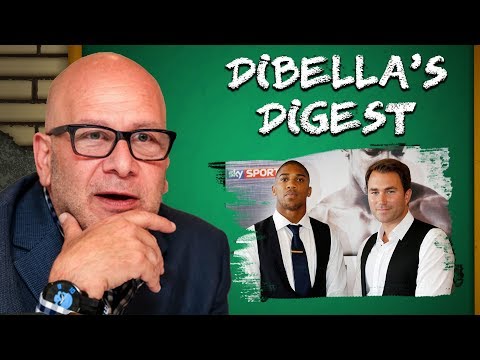 “I think in that kind of circumstance, there are wealthy people. The kind of people that would buy the first two rows of an A.J. fight are going to buy a VIP table. And by the way, in typical fashion, during this s*** who gets richer? The rich.

“American billionaires, their net worth is increasing in this time. And I’m sure the same is true for some of the wealthiest people in the UK and in Europe. So I can see that idea, it’s just intelligent, it’s not rocket science. But I respect Eddie for going in that direction – it’s the way to go.”

DiBella said not only would that sort of fight be something he could promote, it’s not something he’d be attending either.

“It’s not going to be you and I buying tickets for that,” he said. “But I think there’s a place for it, and I think it is the kind of creativity that we’re going to need as an industry. Look, Eddie’s not a moron, Eddie’s looking and assessing the market place, and it’s an intelligent type of thought. I’m having that same kind of thoughts. By the way, there are going to be wedding venues that are not going to be used until there’s a vaccine, and it may create the opportunity for smaller shows.

“People with the means want to go see live sports. So that may create a bit of a niche. We have to create ways to do things in this environment.

“I don’t have a lot of these contracts where I’m guaranteeing these people millions to fight an ordinary fight,” said DiBella. “(Bob) Arum, Eddie, (Al) Haymon, they’re saddled with a lot of those contracts.