Frank Warren says Eddie Hearn and Matchroom don’t want a Tyson Fury vs Anthony Joshua showdown because they are scared of losing their “cash cow”.

Now it appears as though as long as Fury beats Deontay Wilder in their trilogy match and Joshua defeats IBF mandatory contender Kubrat Pulev, it should be full steam ahead for Fury vs Joshua next summer. The pair remember have already agreed in principle the financial structure of a two-fight deal.

But Warren, whose Queensberry Promotions looks after Fury along with Bob Arum’s Top Rank, still doesn’t believe that Matchroom, who promote Joshua, want the right.

He told IFL TV: I’ve been saying this from day one, not recently, but I’ve been saying it for a long time. They don’t want it, and the reason they don’t Anthony Joshua in the ring with Tyson Fury is because they cannot risk him getting beat by Tyson.

“Because if he does, then where are they? That’s their cash cow, absolutely gone.”

Warren re-iterated the fact that Whyte’s defeat clears the way for the two parties to make Fury vs Joshua happen, and that it is the fight the British public most want to see.

“There are no obstacles to stop this. We can get this fight on, let’s do it,” he said.

“The only one way you’re gonna find out is to get them both in the ring and take the obstacles way. Don’t keep putting things up to stop fights happening. Let’s get them out of the way to make them happen.”

Warren also gave his view on Whyte’s defeat, saying: “It’s all over, rover! I thought Povetkin showed what he can do, he’s a dangerous man and took him out in style.

“Tyson (Fury) did a BT interview yesterday and what he talked about was very sensible, he was talking about levels. And it shows you what the levels are. That was a shot he absolutely got taken out with, Dillian, didn’t get up off the canvas. Ended 1000 days of nothing happening as far as a world title concerned, most of it down to himself.

“He should have taken the Joshua fight when he was offered it but he didn’t do it. His promoter obviously didn’t deliver for him as far as a world title was concerned. 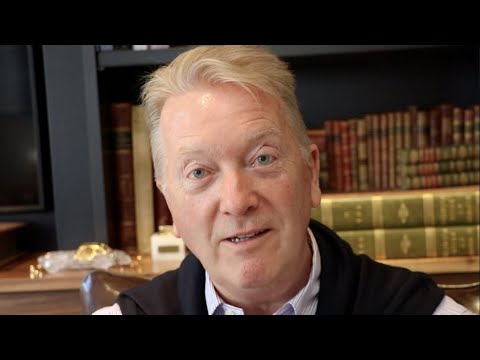 “If I could make the fight with Anthony Joshua and Daniel Dubois, I would do that. To be fair to Joe Joyce, they asked to do that fight when his opponent pulled out. He’s got a good pedigree as an amateur and he’s unbeaten as a pro. But yeah, I would do that fight in a heartbeat. I think my man wins the fight but even if he didn’t win, he’d learn from it. But I think he wins.”