Difficult puzzles require elite strategy to solve them, so Anthony Joshua could not be in better hands  as Robert McCracken prepares him to decode Oleksandr Usyk in London on Saturday night.

AJ will start favourite when he defends his IBF, WBA and WBO world heavyweight titles against the Ukrainian former cruiserweight king. But the difference in odds is small, and it is a proper championship fight between two men who can absolutely both win.

As fight week drew to a close in London, McCracken talked in detail about the threat and the challenges Usyk will pose in the ring at Tottenham Hotspur Stadium in front of more than 65,000 frenzied fans.

He told Matchroom Boxing: “He’s a southpaw, he’s very good boxer, he’s very tricky, he tries to bring you onto counter shots. You leave something out there, he’ll counter you instantly. Good mobility, good balance so yeah he’s an excellent fighter.

“But so is big Josh – he’s worked long and hard on getting the strategy right, controlling the space and using his attributes on Usyk on Saturday night.” 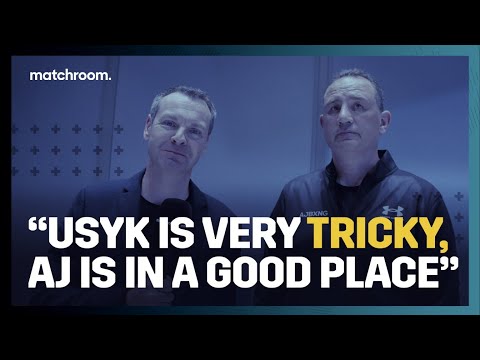 Much has been made this week of the weight of the two fighters. When they both last fought in 2020 the difference was well over 20lbs. On Saturday night it could be much much less – Usyk (18-0) appears to have beefed up while AJ appears to have built himself for speed. McCracken appears confident though in the knowledge that the preparation has been thorough and a positive experience for Joshua (24-1).

“He’s good, his weight’s good, he’s in a good frame of mind, he’s been happy in the camp. They’ve got small gloves on on Saturday night, you’ve got to land effective shots and you’ve got to avoid being hit and he’s worked on that long and hard on that for months really.

“That’s what the aim is, that’s what the strategy is. Control the space, control the opponent, land the shots and defend properly. He’ll be there for the counter and that’s what it’s all about, big Josh controlling that ring on Saturday night.

“You’ve got to be really careful. You see it with heavyweights all the time. You land a big shot, and then you rush in and you take one straight back, it’s dangerous.

The evolution of Anthony Joshua

The evolution of Joshua during his professional career has been a gradual one – from the destroyer who put men away with fearsome ferocity in his early days to the smart boxer who regained his titles in the rematch with Andy Ruiz Jr in December 2019.

McCracken reasoned: “I think he’s enjoying it, that’s the key. If you’re enjoying something you’ll perform better and you’ll work harder and you’ll do better. He’s smarter than he used to be – as you said with the Pulev fight, he learnt on the job quickly.

“He was kind of fast tracked and came through quickly, the Klitschko fight (in April 2017) was in no time – he hadn’t been a pro for that long when he was fighting Klitschko, who was such a dominant champion.

“He’s had to learn in each of these heavyweight fights – he’s fought a variety of top top opponents and he’s come through, and he should come through on Saturday night if he does the right things. But it’s a brilliant occasion for boxing.”

Joshua vs Usyk will be screened live by Sky Sports Box Office pay-per-view in the UK on Saturday night (ring walks are expected between 2200 and 2300 BST, that’s 1700 and 1800 Eastern Standard Time in the United States). DAZN meanwhile will stream the bout outside the UK – including in the US.