Alexander Povetkin knocked out Dillian Whyte in stunning fashion in their first meeting seven months ago, but he isn’t focusing on a repeat performance in their rematch on Saturday night.

The wily Russian veteran (36-2-1), now 41 years old, turned back the clock on August 22, 2020 when he shattered Whyte’s world title dreams with a fifth-round KO at Matchroom Fight Camp.

The fact Povetkin himself had been on the floor twice in the previous round made the uppercut which closed the show all the more unexpected.

Since then Povetkin has had to deal with the effects of COVID-19, leading to multiple delays for this huge showdown.

But now he’s ready to meet the 32-year-old Whyte on Gibraltar, on a Sky Sports Box Office pay-per-view in the UK (price £19.95). DAZN will stream the bout in more than 200 markets worldwide – including the United States.

‘Sasha’ doesn’t though expect the evening to be quite as explosive as that clash last August.

Povetkin explained: “I’m very happy to be here, I’m relaxed, confident and the only thing on my mind right now is to go out on Saturday and show some good boxing.

“I’ve almost forgotten about the last fight because this is finished. I think that Dillian will be better in the second fight then the first. At the same time, I’ll try to be more careful, pay attention more to my defence. 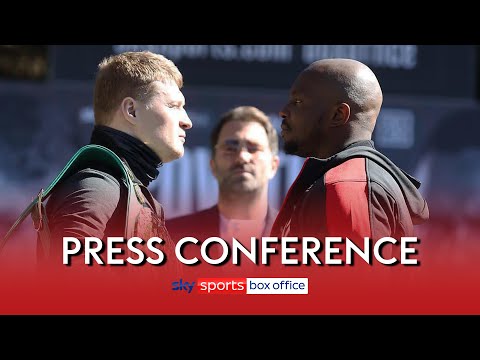 “I don’t have this mindset that I’ll knock him out. It could go the distance; I’m not focusing on the knockout and I’m going to follow my plan.”

Whyte (27-2) was on the cusp of a shot at the WBC heavyweight title held by Tyson Fury when he met Povetkin. A win on Saturday would regain the position as mandatory challenger. He is well aware what is at stake.

“The first fight was a good fight, we both fought well, I knocked him down a couple of times and he came back to win – he landed a good punch.

“I’m glad that he took the rematch, I’m glad we’re here again. We’re about to get it on again in two days, I want to say a massive thanks to the Gibraltan people and team who have made this happen.:

‘The Rumble On The Rock’ is the biggest fight of Whyte’s career as he freely admits. Another defeat by the Russian would prove disastrous for his dream of one day becoming a world heavyweight champion.

“This is the most important fight of my career. Like I said this is boxing, I’ve been through ups and downs my whole life so I’m using to bouncing back, proving people wrong, showing people what I can when they’ve written me off.

“I’m good. People talking about the defeat, it’s nothing. I’m doing something, changing my life and I’m constantly improving. Povetkin’s a good fighter, top amateur, gold medallist, but I’m learning, improving and getting better every day. Saturday I’m going to leave it all on the line once again.

“The main thing is the win; I’m a competitor and I hate losing so I want to make it 1-1. I’ll get the win whatever, you’ve seen me adapt in different fight – getting off the floor and winning, out jabbed fighters that faster than me. My coaching team has worked hard on different plans and working different areas.”

Xavier Miller endured a baptism of fire as Whyte’s head trainer for the first time in that Povetkin defeat. But he is philosophical about what happened that night.

“The first fight, that chapter has ended now, it’s done. We’re just looking forward to Saturday. We’ve worked hard, all credit to Dillian he got straight back to work after. It’s straight business on Saturday.

“The tone of the fight, the way the fight was it was only going one way. But this is Heavyweight boxing, we’d made no excuses but gotten straight back into camp. All we want to focus on now is Saturday, last fight is done. We have to win on Saturday and that’s what we’re going to do.”