Alexander Povetkin vs Dillian Whyte 2 weights were announced in Gibraltar on Friday, and ‘The Body Snatcher’ looked in great shape for the eagerly-awaited heavyweight rematch in Gibraltar on Saturday night.

Dillian tipped the scales at a very trim 247lbs (17st 9lbs) – some 5lbs lighter than he had for their first meeting at Matchroom Fight Camp last August.

Povetkin meanwhile came in at 228lbs (16st 4lbs), some 4lbs heavier than he was for that first meeting. The Russian (36-2-1) of course has had to deal with the effects of COVID-19 since that fight. 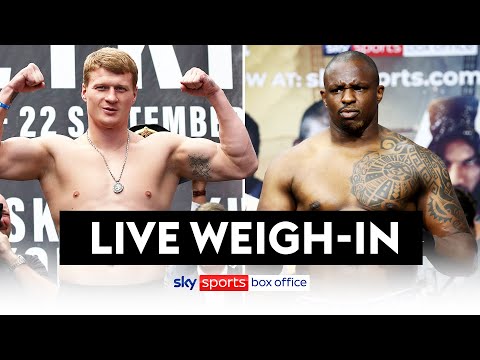 Dillian (27-2) was on the cusp of a challenge for the WBC heavyweight title held by Tyson Fury when he met Povetkin last year. He had ‘Sasha’ down twice in the fourth and appeared to be on course for victory. Povetkin though rose to stun Whyte with a beautiful uppercut to close the show a round later.

The WBC interim heavyweight title will again be on the line on Saturday night. The 32-year-old Whyte knows he must prevail if he is to get back into the world-title picture any time soon. The titles are currently off limits with Tyson Fury and Anthony Joshua destined for that undisputed summer showdown.

He told Sky Sports: “Definitely looking for the stoppage, it’s just how I go about it. I’ve got different ways of pressing him. Using angles, using my range, my legs and stuff. We’ve worked on a lot of stuff.”

Povetkin vs Whyte 2 on TV

Saturday night’s bout will be a pay-per-view show in the UK with Sky Sports Box Office broadcasting at a cost of £19.95. DAZN meanwhile will stream the bout in 200 countries worldwide – including in the United States.