Robert McCracken says nobody in the Anthony Joshua camp is taking Kubrat Pulev lightly ahead of Saturday night – least of all the unified world heavyweight champion.

AJ’s head trainer rates the Bulgarian veteran (28-1) highly, and says he will present a stern test for the reigning IBF, WBA and WBO king at London’s SSE Arena, Wembley.

But he also says Joshua is in terrific shape after a great camp, and ready to clear the path to a superfight against Tyson Fury next summer. 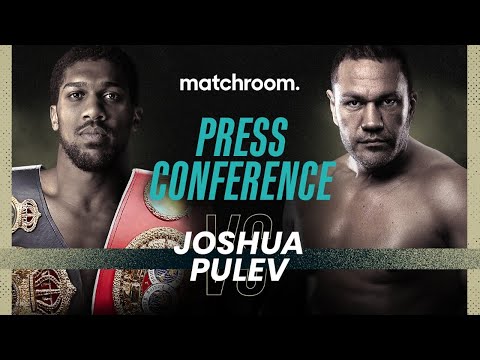 McCracken said: “He’s worked long and hard on the discipline. He doesn’t underestimate anybody, takes everybody dead seriously. He’s not unified champ twice for no reason, he’s a fantastic fighter. He’ll only get better and this is a good fight for him Saturday night and it’s one we look forward to.

“And certainly Kubrat Pulev is one of the best out there, if not in the top three heavyweights. He’s a really good fighter, but I believe Anthony is a better fighter. That’s why he’s the champion and we believe he’ll prove that Saturday night.”

McCracken had high praise for the way his man has gone about his business in camp, and says Pulev is in for a shock on Saturday night.

“He’s had a real good camp, he really enjoys boxing. We’ve been doing more boxing sessions – two a day in some cases for most of the week – he’s enjoyed that. He’s sparring great, really good.

“His athleticism’s brilliant. His physical strength is phenomenal. I think that’s what people don’t realise until they get in the ring with him is how he can move and how strong he is.”

Joshua has learned from Ruiz defeat

McCracken believes it is a different Joshua now, one with the discipline and work ethic to ensure there are no more slip-ups.

“I just think he’s gone through a learning experience. wasn’t 100 percent going into the first Ruiz fight. We took the rematch – you called me within 24 hours, the next morning.

“In my opinion he won the rematch comfortably, and we always thought he would against a very good fighter in Ruiz by the way. Very strong, underestimated boxer.

“The discipline that you mentioned has been in him in the spars, he’s been disciplined, he’s been on point and Saturday night can’t come soon enough.”

Joshua vs Pulev will air live on Sky Sports Box Office pay-per-view in the UK at a price of £24.95. Streaming platform DAZN will show the bout in more than 200 countries around the world – including the United States.