Tommy Fury is confident his brother Tyson will not look past the threat of Deontay Wilder as he looks to stay on track for a unification match with Anthony Joshua.

‘The Gypsy King’ (30-0-1) must now meet Wilder (42-1-1) for a third time instead of Joshua after losing an arbitration ruling to ‘The Bronze Bomber’ earlier this month. They are set to meet in Las Vegas on Saturday July 24.

The Joshua showdown – which had been planned for Saudi Arabia on August 14 – could still be rekindled later in the year. But first Tyson must once again nullify the threat of the heavyweight division’s biggest puncher.

Tyson not a stupid man

He told BT Sport: “He knows if he comes unstuck against Wilder this big fight (vs Joshua) could be in jeopardy. So he’s gonna be training extra hard for this. At this level of boxing you can’t take your eye off the ball. You’d be stupid to, and Tyson’s not a stupid man.

“I think you’re gonna see an even better Tyson and an even better Wilder, definitely because it’s his last roll of the dice. If he loses again, where’s he gonna go? He can’t go anywhere. So he’s gonna give it his best shot. So I think we’re in for a real treat at the end of July – or whatever happens – because the one thing that I do know now is that nothing’s on until they’re in the ring. 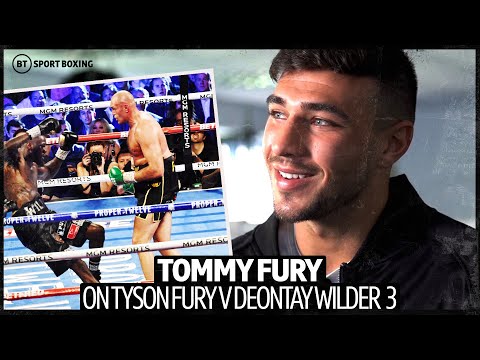 “It was done, signed, sealed, Joshua. Everyone was going on about it, and then boom – within 24 hours he’s fighting Wilder. Boxing’s a funny game.”

While Fury faces Wilder in July, Joshua has also had to find a new opponent for his summer engagement, and is likely to defend his IBF, WBA and WBO belts against Oleksandr Usyk in August.

Usyk no pushover for AJ

Tommy said: “Not an easy fight. I said in an interview a couple of days ago, Joshua better not slip up this time like he slipped up last time (against Andy Ruiz Jr in 2019).  Because nothing’s nailed on.

“Usyk’s a big man, he’s been an undisputed world champion at cruiserweight. Anything can happen – we’ve seen that in the Ruiz fight. So he’s gotta keep his mind on it.

“All these fighters – especially Joshua and Tyson – have gotta keep their minds on it because we all want to see this big fight. But they’ve all got duties to fill before that happens.”