Tyson Fury has played down talk that he could fight Deontay Wilder in Australia over Christmas, joking that it could end in divorce if he did.

‘The Gypsy King’ is contracted to meet ‘The Bronze Bomber’  for a third time later this year – and promoters are currently seeking a suitable venue with the ongoing COVID-19 pandemic causing havoc with live sports.

Macau and Australia have been mentioned as possibles recently – with local promoter Dean Lonergan saying the latter was a very real possibility and that Boxing Day local time (Christmas Day in the United States) a potential date. Bob Arum – whose Top Rank promote Fury along with Frank Warren’s Queensberry Promotions – then admitted a fight Down Under could be on the cards.

Appearing on Queensberry Promotions’ Lockdown Lowdown on YouTube, Fury said: “I’ve have had a couple of phone calls from friends saying ‘Are we going to Australia?’. I believe Bob may have said something about fighting in Australia on Christmas Day. At the end of the day yeah, Christmas is a very festive, religious time for me. I’ve got kids you know. Careers and sports things aside, family comes first. 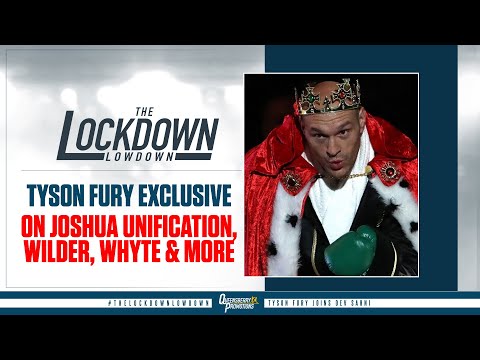 “To go away over Christmas to earn a living, there’s 365 days in a year, any other day but that. I don’t really think I’d be interested in boxing on Christmas Day to be honest – I don’t need the money that much and there’s plenty of other time for boxing. It wouldn’t really be for me, Christmas Day. Before it, November, December, running up to.- even on the 20th or something like that – I’d still do it, but not Christmas Day, it would be too far. And I think it’d cause me divorce as well!”

Fury (30-0-1) and Wilder (42-1-1-) have met twice so far, the first time a thrilling draw in Los Angeles in December 2018 when Fury had to get off the floor twice to hear the final bell. But he made no mistake in the Las Vegas rematch in February, battering Wilder to a seventh-round TKO defeat – the first loss of the American’s professional career.

Now WBC, Ring magazine and lineal champion Fury also knows that if he can safely negotiate the third meeting with Wilder, he has the tantalising prospect of an all-British double-header with Anthony Joshua in 2021 to unify the titles. It was revealed earlier this week that the fighters have ‘agreed in principle’ the financial terms for that two-fight deal. The first fight would be a 50-50 split with the winner getting the lion’s share of a 60-40 agreement for the rematch.