“His legacy is in bits” – Fury vows to retire Wilder

Tyson Fury has vowed to retire Deontay Wilder when the pair meet for a third time in Las Vegas on Saturday night.

Fury destroyed Wilder that night, stopped him inside seven very one-sided rounds in the MGM Grand Garden Arena. The WBC, Ring magazine and lineal champion described his American opponent as “weak” at Wednesday’s final press conference, and is predicting a similar result on Saturday.

“Wilder is a weak person mentally and I’m going to knock him out on Saturday night,” said Fury.

“I obliterated him in the rematch and I see much more of the same in the third fight. 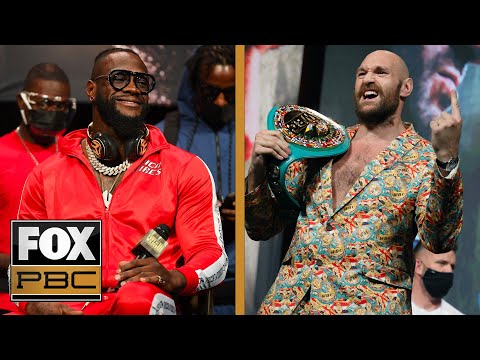 “I’m the last man standing between me, Deontay and Anthony Joshua. I’m the last one undefeated. I’m the two-time heavyweight champion and I’ve never lost a fight. That’s history.”

Wilder spoke again on Wednesday about his desire for ‘redemption, retaliation and retribution’ after the perceived injustices of that night in February 2020. The Alabama man remember produced a string of excuses for his defeat.

Fury though laughed off those comments, arguing: “He says he wants to do bad things to me and that he’s got all this anger and aggression. Those who hold hot coals with aggression are the ones who get burned. He knows he’s lost twice and that he’s going to lose the third time.

“He’s in denial and he’s getting knocked out. His legacy is in bits. I knocked him out and now I’m going to retire him.”

Fury had Javan SugarHill Steward heading up his corner for the first time when he fought Wilder second time round. They continue that budding partnership on Saturday and Fury is very happy with the association they have formed.

“Me and SugarHill go back to like 2010 in Detroit. We have a great bond going. To have any successful relationship, you have to have good communication. We’ve got that. We just gel together.

“It’s not easy for me to pick a trainer because I’m outspoken and do outlandish things. I have to have someone on the same wavelength to match that and I’ve definitely found a match with SugarHill.”