Tyson Fury is set to go into the biggest fight of his life in the knowledge his preparation for the massive showdown with Anthony Joshua is “not ideal”.

Twice in recent weeks ‘The Gypsy King’ (30-0-1) has publicly talked of the dangers of inactivity for elite fighters. First when Conor McGregor lost his UFC rematch with Dustin Poirier. And then when Josh Warrington was stunned by Mauricio Lara.

Clearly it appears to have been playing on his mind for reasons closer to home too. If the showdown with Joshua does take place as expected in June, Fury will be coming off an absence of nearly a year and a half.

Tyson has not fought since that devastating demolition of Deontay Wilder in their Las Vegas rematch last February. He was to have faced ‘The Bronze Bomber’ in a trilogy fight last year, but eventually moved on after a series of delays. 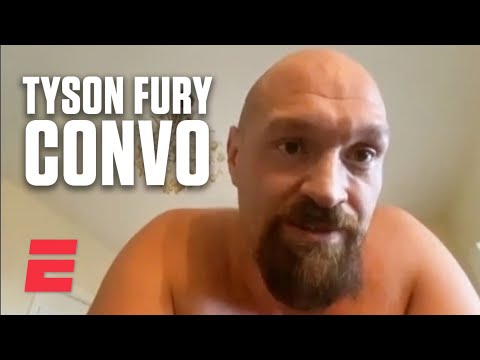 “It was just a big mess-up,” Fury told ESPN. “I should have boxed, because I’ve been so inactive. I’ve been out for over a year. By the time I fight again, looking at maybe June if this Joshua fight happens, that will be a year and six months out of the ring, which is not ideal preparation for any superfight.”

While promoters Eddie Hearn and Bob Arum have regularly said recently that contracts are close to being signed for Fury vs Joshua, ‘The Gypsy King’ is clearly not counting his chickens.

Fury’s plan at present is to fight twice in 2021. With a couple of potential scenarios depending on what happens with the Joshua negotiations. It is expected of course their deal will be for two fights.

“If that fight (vs Joshua) doesn’t happen this summer, it’s got to happen sooner or later. But Top Rank has to give me two fights this year. I will fight two times on ESPN. I don’t care who it is. If it’s not Joshua, we’re looking to fight in April or early May, and the end of the year. If it is Joshua, then June and the end of the year. Bang, bang. So, 2021 is looking bright.”

Fury has two fights remaining on his current five-fight deal with ESPN. He signed that in 2019 for a reported £80million.