Tyson Fury WILL fight before the end of 2020, but it is unlikely to be that eagerly-awaited trilogy fight against Deontay Wilder.

Multiple UK media reports on Saturday claimed the Wilder showdown was definitely off. They also claimed ‘The Gypsy King’ would now look to fight another opponent in the UK before the end of 2020.

Those reports were rubbished by Wilder’s manager Shelly Finkel in an interview with World Boxing News. He said his team are still looking to get the bout on in December.

On Saturday night, Fury’s co-promoter Frank Warren spoke to BT Sport Boxing to give an update on the situation. The upshot was:

Warren said: “I don’t know whether that fight (Wilder 3) can be got on this year. Promoters, both sides, we’ve worked very hard to try and make it happen. But it’s looking like it’s not going to happen and there was talk about getting it on next year. 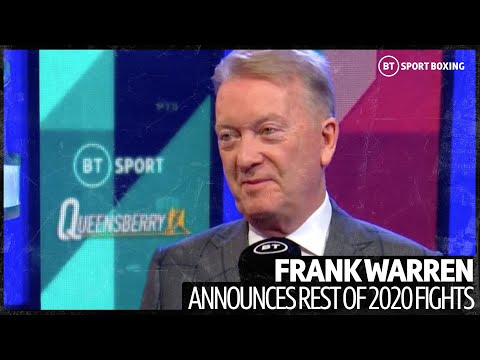 “The situation is that Tyson’s been training solidly since February and he wants to fight this year. My concern is Tyson’s welfare, wellbeing and delivering what he wants.

“So he will fight this year whatever happens, Contractual commitments are what they are, but contracts don’t go on for ever so if the fight can’t be delivered in the contractual period then obviously Tyson will move on and fight, and maybe revisit it another time.”

Warren stressed that his desire is to deliver what Fury wants, and that is a fight in 2020. Wherever, against whoever.

“The fact of that matter is that what matters to me and everybody around him, his management team MTK, his joint promoters Top Rank, is doing what Tyson wants to do. And that’s where we’re at.

“We always honour our contracts and obligations and Tyson will do that. What he’s contractually bound to do is what he will do. He will fight this year.”

Asked whether the Wilder fight could still happen this year, Warren gave an honest appraisal, consistent with his stance throughout. He and co-promoter Bob Arum have always said that doing the bout without a live gate would likely be a blocker.

He explained: “Not unless somebody comes up with a serious truckload of money with guarantees and we see that whatever they do come up with is real.”

Fury vs Wilder 3 had initially been planned for July 2020, and then October. But both dates were scuppered by the global COVID-19 pandemic.

The latest planned date had been Saturday December 19 at Allegiant Stadium in Las Vegas. But that was canned last week when Arum revealed it would not go up against a packed American football schedule on TV in the States.