Usyk vs Chisora worth the wait for Dereck – Haye

David Haye believes the delays to Oleksandr Usyk vs Dereck Chisora will help the battle-hardened UK veteran create a major shock when they finally meet on October 31st.

A cracking showdown between the seasoned Chisora (32-9) and the slick former cruiserweight king Usyk (17-0) is one of the highlights of what is shaping up to be a cracking end to 2020 for the heavyweight division.

The bout had been mooted for the first quarter of the year initially, but Chisora’s promoter Haye believes all the COVID-19 delays have done is allow ‘War’ to get himself even more ready for facing possibly the best southpaw of the modern era.

Haye told Sky Sports Boxing: “For the last year he’s been tuned in to fighting a southpaw. Believe it or not, I’m actually thankful the fight has been postponed as long as it has because I believe his chances of winning on October 31st are significantly higher than earlier on in the year, because he’s spent every day effectively focusing on a tricky southpaw.”

Haye lauded Usyk’s achievements so far, and says at face value there should only be one winner (the Ukrainian is a general 1/8 favourite with the bookmakers). But as he knows himself as a former world champion, the heavyweight division is like no other when it comes to creating massive surprises.

“If you look at his record (Usyk), what he’s done as an amateur, world champion, Olympic gold medallist, undisputed, never lost, won every belt there is, Ring magazine, the lineal champion he’s done it all. And Dereck has lost nine fights. If you look at Dereck’s record against Usyk’s it’s like okay, there’s gonna be one winner.

“But what Usyk doesn’t understand is the heavyweight division is different to any other division in boxing. it’s about size, it’s about weight, and one shot – ask Povetkin (who stopped Dillian Whyte with one uppercut in August after being down twice in the previous round) – It takes one shot to turn the tide. And Povetkin is significantly bigger than Usyk.” 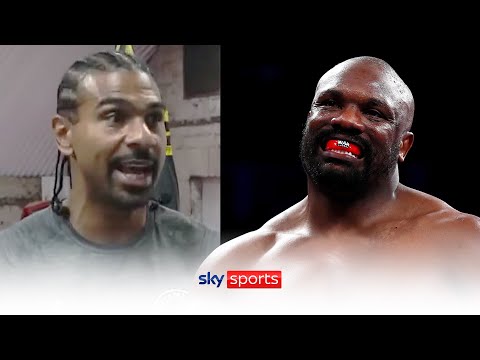 Haye is brimming with confidence on the back of what he believes has been a spectacular preparation so far for Chisora. He says Dereck knows he is now in “last-chance saloon” at elite level.

“Anything can happen in this boxing game, and the heavyweight division – it’s so up in the air,” he said.

“But when Dereck is doing what he’s been dong in sparring against good quality opposition every day, the gaps that he used to have are being filled in with good-quality action and he’s gonna cause an upset and he’s gonna shock so many people.

“He’s dedicated his life to it, his food, his eating, his team. Everything has been really and truly tuned in. He knows this is his last chance, this is last-chance saloon for him. He’s 36 years old, this is it against a WBO number 1 mandatory challenger. He has to take that from him and he’s then in the top five in the world talking about huge megafights with the big names.”