Usyk “disappointed” by WBO stance on Fury vs Joshua

Oleksandr Usyk is “disappointed” at being made to wait for his shot at world heavyweight title glory after the WBO sanctioned a Tyson Fury vs Anthony Joshua showdown instead.

The Ukrainian former cruiserweight king (18-0) has been the mandatory challenge for the title currently held by Joshua (24-1) since the summer of 2019. And after defeating Dereck Chisora in October, he confidently expected to face Joshua next.

The WBO however decided instead that Joshua could face Fury (30-0-1) for all of the belts – which should result in the first undisputed heavyweight champion since 1999. That leaves Usyk now to face another British star in Joe Joyce (12-0) for the interim WBO title.

Usyk’s promoter Alex Krassyuk, of K2 Promotions, told IFL TV: “The WBO was something that stood behind our back and what we relied on. Usyk has been the mandatory for two years, and the WBO would force Anthony Joshua to fight Usyk first,

“But unfortunately we were really surprised to learn that the WBO agreed to sanction the Fury vs Joshua fight for the regular belt and to let another guy go for the interim championship. That was a huge surprise for all of us, and it’s normal that we didn’t like it. The expectations were different.

“He was disappointed and he’s still disappointed. He says ‘if I need to fight him I will fight him’, but that’s not what we were expected to do and what we initially discussed with him.” 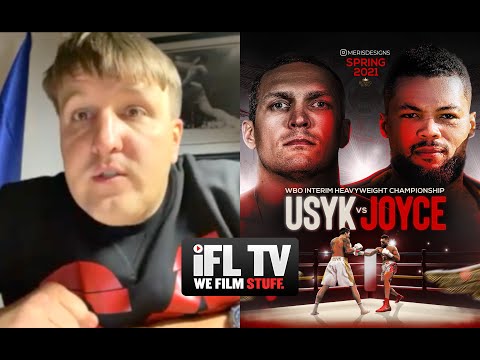 Krassyuk says he has been told it is likely Usyk would eventually become WBO champion should he defeat Joyce. That is because Fury and Joshua are expected to meet twice rather than taking care of mandatory business.

But for now he says Oleksandr is in heavyweight limbo as the interim bout cannot be finalised until Fury vs Joshua is confirmed.

“I spoke to Paco (Valcarcel, WBO President) in January – we discussed this issue. He said: ‘Listen your guy, if he wins he will become the champion if neither Fury or Joshua plan to fight him after the first fight’.

Both Eddie Hearn and Bob Arum have said that there are no remaining contractual issues for Fury vs Joshua, and it is now just a question of agreements being signed. They are currently expected to meet in late June or July – likely in the Middle East.