Usyk living the dream ahead of Joshua showdown

Oleksandr Usyk admits he is living the dream quite literally as he prepares to lock horns with Anthony Joshua on Saturday night.

The 34-year-old former cruiserweight king brings an 18-0 professional record to the table when he tries to take Joshua’s IBF, WBA and WBO world heavyweight titles (live on Sky Sports Box Office in the UK and DAZN in the United States).

The bout will take place in front of more than 65,000 frenzied fans at Tottenham Hotspur Stadium in London, and it is a scenario that Usyk never imagined in his wildest dreams growing up in the Ukraine.

“Every night I go to bed, I pray and then I go to sleep. I never thought ever in my life, the kid from a small town in Ukraine would ever fight in an arena with 65,000 people and broadcasting all around the world on the biggest TV networks.”

Usyk, who is a 9/4 underdog to dethrone Joshua on Saturday night, feels extra comfort in that he is preparing in the same London area where he struck Olympic gold back in 2012. 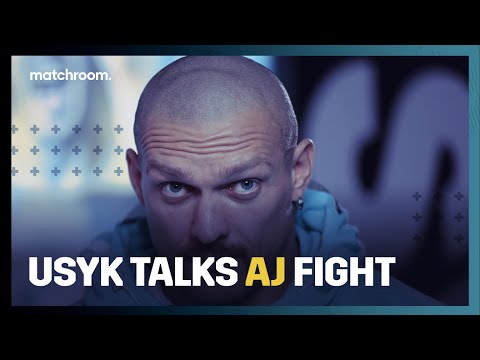 He revealed: “I’m very happy to be here. I remember this area, it was built for the Olympics. I was walking last night with my friend and I found the house where I stayed during the Olympics.”

Usyk may be a huge deal in the Ukraine, but he is remarkably humble when it comes to a comparison with the fame enjoyed by Joshua – a man he describes as “a superstar”.

Joshua is a superstar – Usyk

“He’s (Joshua) a really big huge star. Everybody knows him – all the world around knows him just like in the old days (Mike) Tyson was, right now he is. Even my kids were asking me today ‘did you already see Joshua? Have you seen him?’

Usyk comes into Saturday’s fight having only had two outings at heavyweight so far – victories over Chazz Witherspoon in 2019 and Dereck Chisora in 2020. This represents a huge step up for the Ukrainian.

The next fascinating subplot in the countdown to Saturday will be the weigh-in. Joshua was more than 20lbs heavier than Usyk when the pair had their last bouts. Will AJ slim down to try to mitigate Usyk’s speed advantage? And will Usyk beef up to try and match AJ in the power and strength stakes? We will find out on Friday.