They’re calling it ‘The Perfect Storm’ and DAZN has raised the hype stakes by dropping an epic trailer for Anthony Joshua vs Oleksandr Usyk.

Joshua (24-1) will defend his IBF, WBA and WBO world heavyweight titles against the unbeaten former cruiserweight king Usyk (18-0) at Tottenham Hotspur Stadium on Saturday September 25. The fight is eagerly awaited and a crowd of 60,000 are expected to be on hand to witness it in the flesh.

It is the last bout of Joshua’s UK broadcast deal with Sky Sports, after which there is expected to be a huge scramble for the signature on his next agreement.

DAZN has been streaming his bouts outside the UK for the past three years, and will again have the call for the Usyk showdown in markets including the United States.

It released the epic trailer in the last few days to get fight fans in the mood for what should be a classic showdown between a devastating power puncher and a slick and talented boxer. You can watch it by clicking on the video embed below. 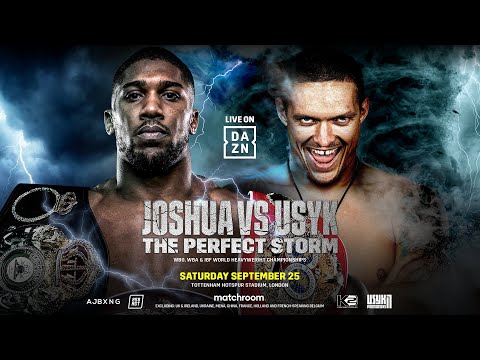 The odds for Joshua vs Usyk show just how close this fight is in the eyes of the experts (Joshua is 2/5 with Usyk 9/4) – AJ knows that he must not slip up though with the potential carrot of a unification fight vs Tyson Fury on the horizon.

Fury and Joshua had looked set to meet on August 14 in Saudi Arabia before Deontay Wilder won a court ruling to force a third meeting with Fury instead.

Now Fury vs Wilder 3 will happen in Las Vegas on Saturday October 9, some two weeks after Joshua vs Usyk. Like AJ, ‘The Gypsy King’ knows he must come through safely against a formidable opponent.

If both the British world champions win, then that ‘Perfect Storm’ moniker will look pretty apt. If they don’t, then it will be more of a nightmare.