Usyk is the WBO mandatory heavyweight contender heading into the Halloween clash with Chisora (live on Sky Sports Box Office and DAZN).

But before moving up into boxing’s marquee weight class, the Ukrainian megastar (17-0) dominated at cruiserweight.

His final fight at the 200lbs limit was a massive PPV battle with Liverpool’s Tony Bellew at Manchester Arena in November 2018.

And now Sky Sports have released a fantastic 20-minute documentary which takes fight fans behind the scenes in the build-up to that bout, and on fight night itself. 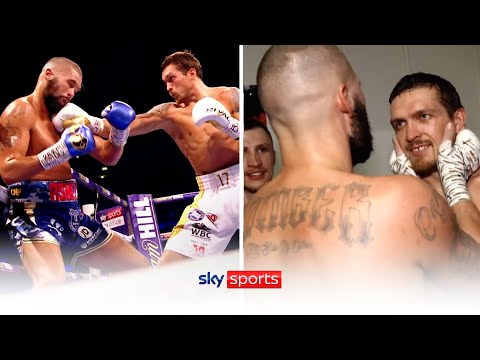 Usyk of course starred inside the ropes when the action started, producing a stunning finish in round eight.

The documentary – entitled ‘A Glimpse At Greatness’ – gives another fascinating glimpse into Usyk’s psyche. The psyche of a fighter who has captivated the British public in recent weeks.

His hilarious videos, dancing and calling out Chisora, have proved viral sensations.

Now he is aiming to do what he did at cruiserweight at heavy, dominate. He believes a win over Chisora would net him a title shot against Anthony Joshua early next year.

Usyk is a heavy favourite to defeat Chisora (32-9), despite the Londoner’s vast experience at elite level. He is a 1/8 chance while Chisora is a 9/2 shot.