‘I want it back in blood’ – Wilder vows Fury revenge

Deontay Wilder says he wore red to the final press conference ahead of his trilogy match with Tyson Fury on Saturday – he wants blood.

‘The Bronze Bomber’ is desperate to atone for that first professional defeat at the hands of Fury in February 2020, still bristling at the perceived injustice of it all.

In the aftermath of that loss, Wilder produced several excuses for the seventh-round stoppage he suffered – including the weight of his elaborate ring walk costume and an outrageous claim (unproven) that Fury’s gloves had been tampered with.

Wilder then parted company with long-time trainer Mark Breland, and replaced him with confidante Malik Scott. Now the stage is set for the trilogy – and Deontay is vowing “redemption, retaliation and retribution”.

Wilder thirsts for retribution, and blood

He said: “My energy is like my mind, it’s very violent. I’m just ready to go October 9. I’ve dedicated myself and devoted my time and my body, me and my team, to reinventing myself. I’m ready to reintroduce myself to the world.

“Get ready for war. This is going to be an amazing fight on Saturday night. I’m wearing my red outfit because I want it back in blood. I’m looking forward to it.”

“I don’t have anything to prove. I’m in a great place and in a great state of mind. I have a lot of great people around me. This fight is about redemption, retaliation and retribution.” 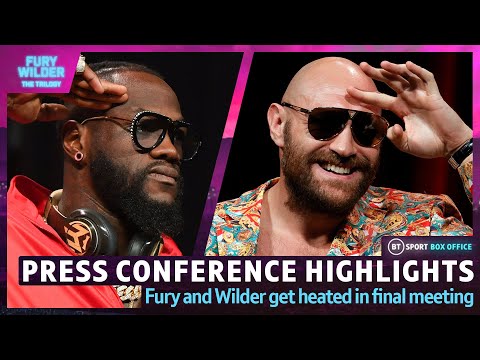 Wilder says the preparation for this bout has been perfect with Scott running the show in camp. He says the multiple delays to fight night (most recently when Fury tested positive for COVID-19) have actually helped him.

“We’ve been going from day one since the last fight. There’s been no stop,” he reasoned.

Delays have helped me – Deontay

“The delays have been beneficial for us. One thing about this camp, is that I’ve had all of my brothers around me who’ve been with me from the start.

“Many people thought I was down and out, but it wouldn’t be fair to the people around me to feel that way. My dedication has been focused every day.

“Over training is a real thing and we’ve been able to take small breaks at certain times before getting back at it. Everything has been good and timed out perfectly.”

Wilder says Fury loss will make, not break, him

A defeat like the one Wilder suffered in February 2020 often finishes a fighter at elite level – they never really recover from it. Deontay though believes it will be the making of him.

“Saturday night is going to be a different fight. It’s rare that we get trilogies like this and I truly believe this one is going down in history.

“I have nothing to lose and everything to gain. Your legacy only dies when the desire for the sport dies. I’m well alive right now.”