Skip to content
Fury vs Joshua News Bellew: Usyk is pure brilliance, only Loma is better

Bellew: Usyk is pure brilliance, only Loma is better

Tony Bellew has lavished praise on the “unbelievable” Oleksandr Usyk as he prepares for his biggest test yet at heavyweight against Dereck Chisora on October 31.

More importantly it will be his first against a big heavyweight who has operated at elite level.

Bellew has the perfect knowledge set to analyse the fight. He lost to Usyk in his final professional fight in 2018.

He also used Chisora as a sparring partner before his victories over David Haye.

The Liverpudlian was blown away by Usyk’s pure boxing ability. So much so that he says only fellow Ukrainian Vasiliy Lomachenko is better right now.

Usyk as good as it gets

He told DAZN’s Ak And Barak Show: “‘Del Boy’ knows what he’s going into – barring Lomachenko, Usyk is probably the best pure boxer in the sport.

“Lomachenko and ‘Canelo’ I would say are the only better pure boxers than him. He is that good, at the heavyweight division he is unbelievable. He’s the real deal, the best I ever faced. He’s unbelievably talented and his footwork is on a level above anyone’s in the world.

“I only realised how good Usyk’s feet were when I got in the ring with him. No-one had feet even close to his. He’s exceptional, he really is.”

When asked to compare the technical abilities of Usyk and reigning lineal heavyweight champion Tyson Fury, Bellew had a fascinating take. He believes Usyk is clearly superior in that area.

“That’s not his (Fury’s) greatest asset in my opinion. Technically the way he throws punches is all wrong. A lot of them are slaps, he’s awkward. Tyson’s greatest strength is his unpredictability and also his awkwardness. 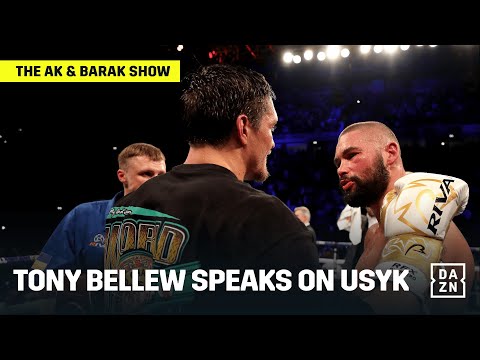 “Taking into consideration he probably has the best footwork I’ve ever seen for a man who weighs 19-20 stone, it’s unbelievable it really is. It’s so unorthodox. It’s impossible to get somebody in to sparring who can kind of resemble Tyson Fury. Impossible to prepare for him.

Usyk is a 1/9 favourite with some UK bookmakers to safely negotiate his big test on October 31. But Bellew says anybody writing off the 5/1 Chisora would be foolish in the extreme.

“Of course he has a chance, he’s a heavyweight, and as we’ve seen he’s been written off many times and he’s found a way through,” said Bellew.

“Every man and his dog had him down and out against Carlos Takam and he just pulls it out of the bag and gets rid of the guy in absolutely phenomenal style.

“There’s just various fights where he’s drawn it from somewhere. He’s definitely live and active in this fight. He knows he can’t afford a loss here, it would be disastrous for his career.

“Believe you me, he’s very very strong on the inside, he’s very heavy, he’s extremely durable.  And if Usyk thinks he’s gonna get it easy in there, believe you me he’s not.”