Wilder will ‘go for broke’ this time – Davison

Ben Davison expects Deontay Wilder to “go for broke” when he finally steps into the ring for a third time with Tyson Fury – hopefully later this year.

The pair are expected to meet in their trilogy fight this winter – potentially on Saturday December 19 at Allegiant Stadium in Las Vegas – the new home of the National Football League (NFL) Las Vegas Raiders.

Davison trained Fury (30-0-1) for his first fight with Wilder – a controversial draw in Los Angeles in December 2018. ‘The Gypsy King’ then handed Wilder (42-1-1) his first professional defeat via a dominant seventh-round TKO in their Las Vegas rematch in February 2020.

He told IFL TV: “I see a completely different approach from Wilder (in the third fight). I think that his approach will be that of – in the second fight his approach was ‘I’m gonna to take my time and almost lull you into trouble’ but Tyson knew that was his gonna be his plan and ‘if you wanna start slow, guess what – I’m not gonna let you start slow, you know’. That was the sort of idea there.

“I think in the trilogy Wilder will look to come out and look to start fast, I think that he’ll go for broke. And he’s a dangerous man – if he’s letting his hands go and starting fast with high punch volume he’s dangerous, the most dangerous man in the world.

“It could be something that you have to be wary of early on, but I just believe Tyson taking over. I feel like the very early part could have a different look upon it, but the outcome will be the same in terms of Tyson stoppage – potentially a little bit earlier this time.” 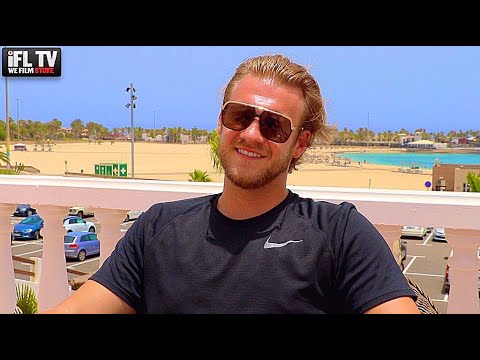 Fury recently claimed that Wilder would knock out both of his main heavyweight rivals – fellow British stars Anthony Joshua and Dillian Whyte – and do so with ease. Davison gave a fascinating lowdown on that view.

“It does make sense. The problem is now, is how’s Wilder’s mentality, how’s his confidence,” he said.

“This is a conversation that I had with Tyson before the first fight, about Tyson doing what he did in the Klitschko fight wasn’t gonna work against Wilder, because Wilder’s the type of guy that’s gonna take risks. Will he still be willing to take those risks?

“Him (Wilder) being so light and so fast and so long, to be able to obviously punch so hard, when he took those risks, his athleticism made him first to the punch – and that speed is very very dangerous. But relying on speed and taking so much distance in one huge movement can be risky. But like I say, because of his athleticism, he got away with it.

Davison had a fascinating comparison for Wilder, and also believes that Wilder vs Joshua might be a different fight now compared to 12 months ago.

He explained: “I always look at Wilder similar to Thomas Hearns, in terms of you know frame size, big puncher. And Thomas Hearns got blew away and come back and dealt with it and was mentally strong enough. And I’d like to believe that after the trilogy with Tyson, Wilder will be able to come back from that.

“So I think stylistically it would have been a very difficult fight for the pair of them (Joshua and Whyte). But again like I’ve said before, Antony Joshua is an improving fighter – he’s worked on areas that were a weakness. I always looked at his style like an old gunslinging match, whoever landed first. Because big heavyweights landing shots, standing tall, repetitive punch patterns, in my opinion it was a matter of time before somebody else landed first.

“That happened with Ruiz, he went away and made some adjustments and he’s an improving fighter, and now shown some versatility. So that becomes an intriguing match-up in my opinion. But from before, I would have said the same thing – Wilder, early.”

While Fury vs Wilder 3 is contracted, some experts (notably Matchroom supremo Eddie Hearn) have openly questioned whether it will happen. ‘The Bronze Bomber’ has been silent on social media for months and underwent bicep surgery after that rematch defeat by Fury. The speculation however been rubbished by Wilder’s manager Shelley Finkel.