You would struggle to find anybody in the UK who would not want a Tyson Fury vs Anthony Joshua superfight to happen on these shores.

But despite the obvious clamour for a mega event, potentially in front of 90,000 outdoors at Wembley Stadium, there is no guarantee that desire will trump cold hard cash. And with a number of territories reportedly showing interest in staging the big clash, at this stage it appears odds against that it lands at home in the UK.

Last December Joshua’s rematch with Andy Ruiz Jr, which generated a domestic record 1.6million pay-per-view buys at £24.99 a time, was held in Riyadh, Saudi Arabia. A repeat would appear to be a pretty good bet for Fury vs Joshua at this stage.

Eddie Hearn joined IFL TV to give a fascinating insight into how the decision for the venue would be made, and the factors which influence it. Here are the best bits:

Fighters will have final say on Fury vs Joshua venue

“I’ve lost count of the amount of messages I’ve got saying ‘if it don’t happen in the UK you’re a disgrace Hearn’. One thing you have to understand is, just like all those people who work for Tyson Fury, work for Tyson Fury, and I work for Anthony Joshua – he’s my boss. Ultimately the fighter and their closest team – they’ll take advice – will have the final decision on where the fight will take place.

“Now I’m not passing the book off to them either, but there’s a very clear decision to make when we sit down and go through the numbers of the fight, that you will earn more than double by not doing this fight in the UK. I wanna make money, course I do, there’s no point lying to you – you’d know I was lying anyway.”

Fury and Joshua both want the fight in the UK

“Do I want this fight to take place in the UK? Of course – it’s the natural home for this fight. But we have to realise, this is the biggest fight ever, and there is so much interest from around the world to stage this fight. And when people say ‘well they’ve got enough money, just tell ’em to do it in England’, ‘alright, I’ll pass that on’. 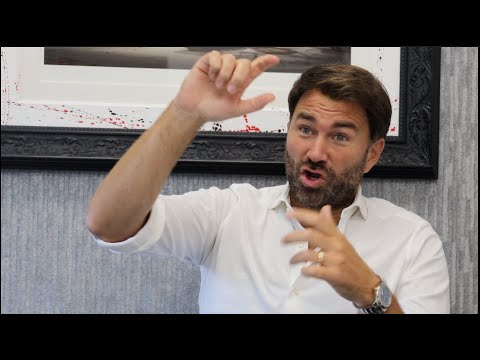 “They both want this fight in the UK, but they also realise this is their moment – it’s never gonna get any bigger than this for both of them. Park AJ at the side, when I go to Tyson Fury or someone does and says these are the options – and let me just pull a number from the sky – £50m to fight in the UK or £100m in the Middle East say. Just forget where you’d prefer that fight to be – just understand that question to a sportsman, not even to a sportsman, to anyone.”

Why can other countries bid more to stage Fury vs Joshua?

“I’m not saying it won’t happen in the UK – maybe one will, one won’t. I gave a terrible interview with the BBC where I said a lot of these countries have government funding to bring major events to their countries to drive tourism, to drive exposure to try and generate a city, a country.

“And I said maybe with everything that’s gone on the UK government will invest in bringing major events to the UK, but I did say it in the middle of a pandemic and I got a load of stick. Well now we’re coming out of that, I won’t lie to you and say that is a model that is a proven success in driving tourism revenue for countries.  So do I think our government has better things to spend their money on coming out of this? Of course I do. But I’m just telling you how other countries operate. We’re reliant on ticket revenue – that’s it.