‘A done deal’ – Hearn still confident on Fury vs Joshua

Eddie Hearn says Tyson Fury vs Anthony Joshua is ‘a done deal’ and he is hoping to announce it this week, despite the negative noises from fellow promoter Bob Arum.

Fury and Joshua are expected to meet in the Saudi Arabian city of Jeddah on one of three summer dates – July 24, July 31 or August 7. The fight would crown boxing’s first undisputed heavyweight champion since Lennox Lewis in 1999.

FIGHT SEASON ON DAZN: Sign up now to watch Canelo vs Saunders for £1.99!

Arum though – who co-promotes Fury along with Frank Warren – has been incredibly downbeat in recent days. He described a summer showdown as being ‘dead in the water’ and even mooted Fury resurrecting that trilogy fight with Deontay Wilder.

We’re in a great position – Hearn

Hearn though says nothing has changed and he remains extremely upbeat, telling IFL TV: “We’re a great position, I keep telling people. 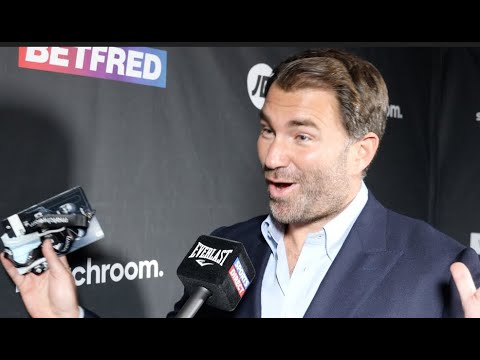 “I keep telling everyone what’s happening. It’s a done deal, okay. They (the prospective site) sent us the contract last night. We do have to review it, we can’t just sign it blind. The contract reflects our changes and our thoughts.

“Everybody is on board. Yes, Frank Warren was correct (saying contracts had been received and were under review), and thank you Frank for that positivity, genuinely. I’m not being sarcastic.

“Because it’s been difficult trying to land a deal like this and someone on the side of one of the fighters is saying it’s dead in the water.

“And then you’ve got the site going ‘what’s wrong?’.  I said absolutely nothing, keep going. ‘Is there a problem?’ No, there’s no problem at all. So, got it last night, being reviewed, back to them ASAP.”

Hearn has come in for criticism for consistently putting timeframes on an official announcement for the biggest fight in British history. Timeframes which then slip. But despite that he did it again, and appears even more determined to close the deal.

“Again, I always mess it up by putting a timeframe on it. I wanna announce next week – we’ll see how we get on.”