Eddie Hearn on Fury latest plus Wilder vs Whyte

Eddie Hearn admits that the latest postponement for Tyson Fury vs Deontay Wilder 3 confirms what already looked inevitable – there will be no undisputed world heavyweight title fight in 2021.

Fury (30-0-1) of course had been lined up to face Anthony Joshua on Saturday August 14 with an eye-watering $155million (£109million) site fee agreed with Saudi Arabia.

But Wilder scuppered that plan by winning an arbitration ruling to force a trilogy fight with Fury. That was planned for July 24 but will now have to wait until October after Fury and members of his team contracted COVID.

Now we have the scenario of Joshua (vs Usyk on September 25) and Fury fighting within a couple of weeks in autumn. If they both win then the undisputed fight is still very much possible, but not until 2022.

Hearn told IFL TV: “I think that was pretty much the case anyway. By fighting September 25th, makes it very difficult to do a fight in December.

A lot of our conversations now about the undisputed fight are end of Jan/February. It probably helps with regards Fury might have wanted to do another fight in November or December, then the whole thing becomes never-ending. 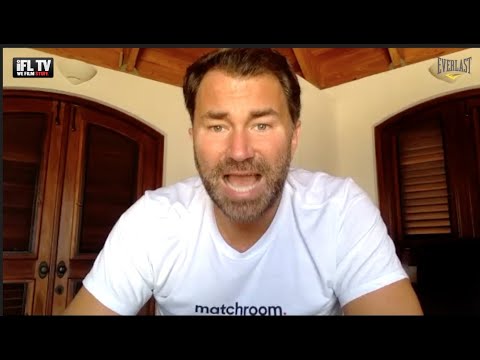 “At least if this fight does happen, and AJ beats Usyk successfully, then we’ve both fought around the same kind of time and then we can try and make the undisputed fight.

“All the focus is on right now the next fight for Anthony Joshua, being successful in that fight and moving forward with his career.”

Hearn on Wilder vs Whyte

When reports began to swirl about the issues with Fury vs Wilder 3 on Thursday, Hearn threw out the (highly unlikely) possibility that Dillian Whyte would happily step in to face Wilder on July 24.

The promoter said: “It was just to reaffirm the fact that he is ready to fight Deontay Wilder at any time. He’s trained non-stop since the Povetkin fight, he’s fit for 12 rounds.”

Whatever happens, it is almost certain that Whyte’s next bout will be in the United States, likely in August. Hearn confirmed that unbeaten Michigan heavyweight Jermaine Franklin (20-0 with 13 wins inside distance) is a potential opponent.