A ‘gutted’ Eddie Hearn says he felt “like a one-man army” trying to make Tyson Fury vs Anthony Joshua during the past few months.

The Matchroom Boxing supremo appeared to have got the biggest fight in British boxing history over the line courtesy of a record $155million (£109million) site deal with Saudi Arabia. Fury himself even announced the August 14 date and venue in a social media video on Sunday May 16.

Within 24 hours though that grand plan lay in ruins after Deontay Wilder won an arbitration ruling against Fury over their collapsed 2020 trilogy fight. The ruling said Fury must give Wilder that third fight by September 15.

Now Fury vs Wilder 3 is set for July 24, with Joshua set to meet Oleksandr Usyk in late August. Leaving Hearn to be highly critical of the Fury camp over how the dream undisputed fight fell apart.

Hearn on Fury vs Joshua collapse

He told the DAZN Boxing Show: “I’m gutted. I said before I felt like a one-man army trying to get this fight made. When you look back quite frankly the whole thing stinks.

“There was never one positive comment from the other side when we were trying to do this deal. I did as much as I could to do it, but I can’t control the other side.” 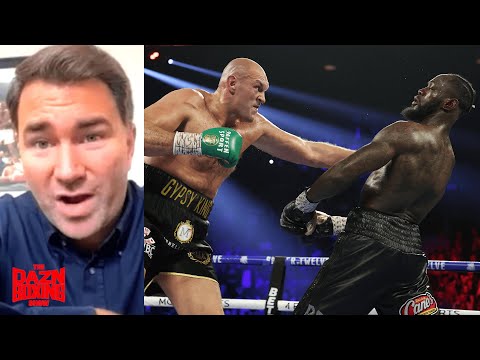 Hearn says he was told by all concerned that the Wilder arbitration would not be a risk to Fury vs Joshua happening.

“The arbitration’s ruling was quite simple when it came out, that Top Rank had the right to terminate his contract from like December. They didn’t terminate it, they kept talking.  This was their intention all along to make this fight, that is what now I truly believe.”