Boxing delivered a genuine world first on Saturday night when EDDIE HEARN AGREED WITH JOHN FURY over the recent collapse of Fury vs Joshua.

The two British heavyweight world champions had appeared all set to meet in a massive unification match in Saudi Arabia on August 14 – but then boxing politics shattered the dream.

Deontay Wilder won an arbitration ruling forcing Fury (30-0-1) to give him a third fight, which will now take place on July 24. Joshua (24-1) meanwhile appears likely to face Oleksandr Usyk in August.

On Friday Fury Sr, always brutally honest and outspoken, said he felt the Wilder fight was “a mistake” for Tyson, and described the whole thing as “diabolical”.

That teed up Hearn to agree with Big John for about the first time in history. He spoke to IFL TV in the immediate aftermath of Devin Haney’s decision win over Jorge Linares in Las Vegas on Saturday night.

Hearn said: “Yeah, AJ posted it actually and I watched it last night. I couldn’t believe what I was watching because I thought ‘blimey, it’s the first time I’ve ever agreed with John Fury’.

“If you want an analysis of what happened, don’t listen to rabbit mouth here, watch the John Fury interview, very good, very good,  and actually he’s got it pretty much spot on. The whole thing stinks and it’s done. Unfortunately the bad side of boxing.” 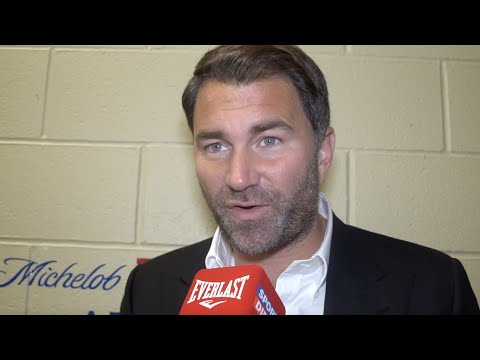 Hearn and Matchroom were given 10 days from May 21 to make Joshua’s showdown with WBO mandatory Usyk, or it would go to purse bids. He remains hopeful the deal will be done in the coming days.

He added: “But what we gonna do, we gonna talk about it for like the next few months? We’ve gotta make AJ’s fight which hopefully we’ll do this week. We move on, we move on. But yeah, interesting seeing that interview – a very good analysis really of what happened.

“I don’t always agree with him (John Fury) but I thought it was a very good interview.”