Anthony Joshua fighting behind closed doors would be the last resort according to promoter Eddie Hearn – but it remains a possibility.

The IBF, WBA and WBO gold heavyweight champion had been due to face Bulgarian mandatory contender Kubrat Pulev at Tottenham Hotspur Stadium on June 20, but the bout was called off due to the ongoing COVID-19 pandemic.

Hearn understands the economic headache AJ fighting behind closed doors would present via lost revenue from a live gate, but says he would consider it as a last resort to make sure the British star remains active. Joshua’s last fight was that rematch with Andy Ruiz Jr in Saudi Arabia in December 2019, which saw Joshua regain his heavyweight titles.

“I want to give ourselves every opportunity to stage an AJ fight in front of a crowd. We have to probably bite the bullet and say he’s only going to box once this year, so if that’s the case, we’re okay to go in September or October. Don’t want to go much further than that – he hasn’t boxed for a year nearly since then. 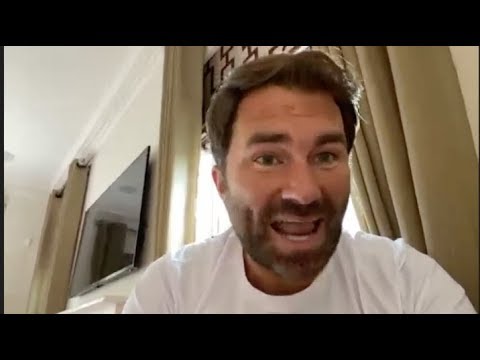 Hearn explained the economic issues that lost gate revenue would present, and the potential scenarios which might unfold.

“With those kind of fighters, you know, where do you generate the lost revenue from the gate? Who takes the hit? Probably me. but sometimes the fighters.

“For instance Povetkin-Whyte might do a million quid on the gate. If you go behind closed doors, how do you substitute that million quid? Probably some fewer costs because you’re not in a big arena, maybe you take a fight or two off the undercard, then you go back to the fighters maybe and say ‘this is the situation, what do you want to do?’

“They will probably say: ‘well what do you want to do Eddie? You shouldn’t make any money out of this show’. Or you go back to Sky or to DAZN, and say: ‘come on guys we gotta substitute this gate, how we gonna do it?’

“But, to fight quicker, there might be scenarios where that might happen. Bob Arum is already talking about ‘fighters having to be more realistic now’. Probably a chance, some people are thinking about resetting the market. I don’t really see it like that. I just think we have to find a way to stage the megafights. When you talk about an AJ fight, the gate could be 10 million, talk about a Canelo-Billy Joe Saunders fight, the gate’s 8 million.

“You don’t just go ‘oh we’ll do it in a studio then, oh don’t worry about the 10 million, come on mate, wanna get this fight away.

“So you gotta be creative, you gotta think on your feet and you gotta find solutions.”