We will not lay down – Eddie Hearn plans are huge

Eddie Hearn says he has huge plans to keep the big nights coming after confirming that Oleksandr Usyk vs Dereck Chisora will take place on Saturday October 31.

There was an element of surprise as well as excitement when Hearn made the announcement on Wednesday, less than 24 hours after UK Prime Minister Boris Johnson announced a slowdown in the return of crowds to arenas due to the ongoing COVID-19 pandemic.

The Matchroom Boxing supremo confirmed that it is highly likely the event will take place without fans and said he has a number of potential venue options. He had been working on Wembley Arena with a crowd of around 1000 before the Government’s bombshell this week, and says the bout may still end up there.

Hearn said: “We got a real kick in the nuts from Boris yesterday didn’t we, just as we were on the verge of bringing fans back.

“This is great timing. We had been working really hard on this. We had hoped we would get people in the venue on October 31st – I haven’t given that up yet. But it will happen with or without anybody there.”

The reality of big fights going ahead without a live gate means a new commercial reality for boxers and promoters, and Hearn stressed that it took real creativity and desire from all concerned to get this over the line.

“I’m proud of getting it over line – but I have to say as well, massive props to ‘Del Boy’, David Haye, Usyk, Alex Krassyuk, because we’ve found a way collectively to make this happen,” he said.

“It couldn’t have happened without people getting creative and having that desire to make this fight. And both guys said ‘we want this fight’. You heard them over the last couple of weeks screaming at each other on social media, they’ve been in training for a long time, they wanna make this happen, they both believe they can win this fight. So they take the fight and boxing moves forward.” 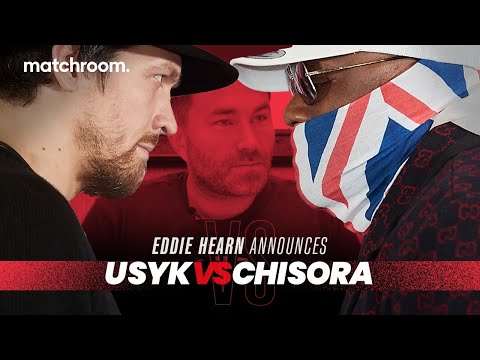 Hearn said mindset is hugely important with the pandemic continuing to affect live sport in a huge way – and he stressed his was to try to find ways of making sure big events continue to take place.

“And at a moment when sports are struggling and boxing is struggling, we have to keep the drama, keep the momentum and keep the big nights coming. And I’ve got a lot of plans for the big nights to keep coming for the rest of the year. And I’m gonna try and throw a completely different experience on it.

“We had this plan when this started that I’m gonna find a way to do Whyte/Povetkin, Usyk/Chisora and AJ against Pulev. They were the three big heavyweights that were already scheduled pre-pandemic.

“We’ve already done one, we’ve got another one scheduled, and now we’ve got a rematch of the first one and hopefully we’re on the verge of AJ as well. Fans or no fans, we’re not gonna lay down and we’re not gonna say it’s not impossible.

“We’re putting our foot on the accelerator, not the brakes.”

Usyk vs Chisora will be a pay-per-view event in the UK, to be aired live by Sky Sports Box Office. Streaming platform DAZN meanwhile will screen the bout in the United States.