Skip to content
Fury vs Joshua News Frank Warren on Dillian Whyte: I’d love to have him

Frank Warren on Dillian Whyte: I’d love to have him

Frank Warren says he’d love the opportunity to promote Dillian Whyte, and says ‘The Body Snatcher’ should be scratching his head wondering why he hasn’t had a world title fight yet.

Whyte (27-1) has been the mandatory contender for the World Boxing Council (WBC) title for what seems an eternity now, and is due to get a title shot against the winner of Tyson Fury vs Deontay Wilder 3 by the end of February 2021.

While his promoter Eddie Hearn – who also handles IBF, WBA and WBO king Anthony Joshua – says Whyte must take priority over a Fury vs Joshua unification match next year and is desperately trying to make that WBC shot happen, Warren says he’d welcome the chance to try and make Whyte a world champion.

Warren told Seconds Out: “It’s an open door – he hasn’t even have to knock on it. We tried to do something a while ago but he chose to stay at Matchroom. And since he’s stayed there, he’s still not had his world title fight despite the fact he was number 1 with two organisations at the time – I think WBO he was number 1 and he was number 1 in the WBC.

“We all know what happened regarding the WBC, but while he was number 1 with the WBO that should have been an easy fight to make, him and AJ, they were both promoted by the same promoter (Matchroom). It didn’t happen, so if I was him I’d be scratching my head and asking why. Mind if he keeps scratching his head wondering why he’s not had a world title fight, he’ll be down to the bone on it.” 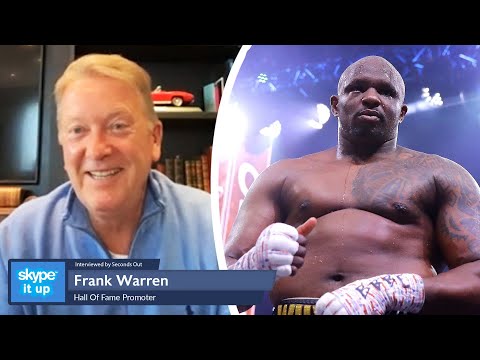 Warren also played up his credentials in being able to deliver top-level fighters what they crave most – the chance to fight for world titles.

He added: “If he (Whyte) come with us – Tyson (Fury) at the moment has an obligation to fight Wilder – after that we’ll see what happens. It is what it is, it’s there. But one thing’s for sure, Tyson signed with me and within six months of signing with me, he fought for the world title (against Wilder in December 2018). And when Tyson signed with me the first time, within six months he fought Klitschko for the world title (in November 2015), we got him into the number 1 position and the fight happened.”

With WBC, Ring magazine and lineal king Fury plus exciting up-and-coming heavyweights like Daniel Dubois (14-0, 13KOs) and Joe Joyce (10-0, 9KOs) already in his stable, Warren’s Queensberry Promotions has almost an embarrassment of heavyweight riches. But adding Whyte is something he’d still love to do.

“I’m happy where I am now, if Dillian wants to come and join the party, that’s great, we’d love to have him on board – not a problem with that. It’s very exciting times for the heavyweight division – I can’t think in my time in boxing it’s ever been so exciting as far as Britain is concerned.

“We’ve got how many of the belts in the UK? It’s amazing isn’t it, it’s all here. And good quality champions and more importantly good youngsters coming through as well. So I’m really thrilled to be involved in the fighters that we’re involved with in that division.”

Whyte meanwhile is now preparing for his next fight – a tough assigment against experienced former heavyweight champion Alexander Povetkin (35-2-1). Whyte will battle the Russian on Saturday August 22 at Matchroom’s Fight Camp in Brentwood, Essex. The fight will be aired live on Sky Sports Box Office and on DAZN in the United States.