The news that Eddie Hearn is leaving Sky Sports to go all in with DAZN caused shockwaves in UK boxing this week, and fellow promoter Frank Warren says the move will not come without its challenges.

Hearn has reportedly agreed a five-year deal starting July 1 which is worth nine figures. Per Mike Coppinger of The Athletic, it does not though include Anthony Joshua and Dillian Whyte. Hearn already works with DAZN in the U.S. after signing an eight-year deal worth a reputed $1billion in 2018.

While Warren knows and recognises the financial power wielded by DAZN and its owner Len Blavatnik, he also understands what life is like working with Sky – and without them.

Speaking to Seconds Out, he explained: “They (Matchroom) won’t have Sky’s marketing machine behind them, that’s been a big plus for them. I know that, we were there and I know how much it helped us when we were doing pay-per-view shows on Sky. It’s a formidable machine, that will not be happening any more.”

Hearn has had an exclusive partnership with Sky in the UK, so his departure throws up questions about the pay TV behemoth’s future in the sport. Warren for one hopes they remain in the game, reasoning that competition is great for everybody – notably the consumer. 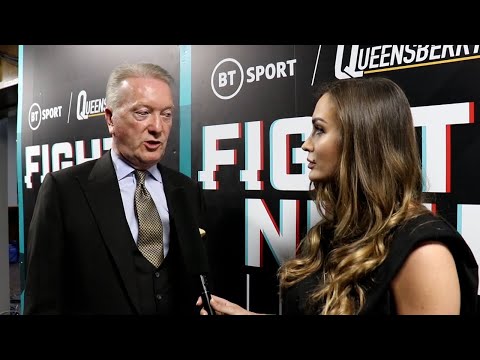 While the attention right now is obviously very much on any announcement to confirm the Hearn/DAZN UK pact, Warren is extremely pleased with the state of his relationship with BT, and the way the broadcaster has grown its boxing reach.

“At the end of the day I don’t really care. I know what we’re doing with BT. BT seems to me in three years has become a significant player in the boxing market here.

“We’ve built some good names here, we’ve brought guys through. When Tyson came back that was via BT and all the hard work that was put into it and many other fighters have come through. We’re in a very comfortable and a good place.”