Fury taunts AJ ahead of 2021 double-header

Tyson Fury has taunted Anthony Joshua as the two look ahead to the possibility of not one but two blockbusting world heavyweight title unification fights in 2021.

Earlier this week Joshua’s promoter Eddie Hearn said AJ would “sign now” to face Fury in 2021, and also mooted the likelihood of it being a two-fight deal.

Fury discussed the same topic in an IFL TV interview with reality TV star and celebrity DJ Mark Wright, revealing: “We’ve got the Wilder rematch at some point and then we’ve got the two AJ fights. Well one and then obviously when I batter him he’ll want a rematch.”

There had been speculation that Wilder might be persuaded to step aside to make way immediately for Fury vs Joshua – but ‘The Gypsy King’ rubbished those rumours.

“Some newspaper reported that he wanted £10m to step outside,” he said.

“I’m not paying him no money to step aside, I’d rather take his scalp again. I’ll beat him in the ring – that’s how I’ll get him out the way. I wouldn’t pay him £2million to step aside. I’d rather give him another battering.

“I’m gonna take him out again for a third time – hopefully end of the year – and then we’re gonna go into 2021 for the biggest fight in boxing history between two undefeated British heavyweights – me and AJ – and we’re gonna battle it out for all the gold. There used to be a three-headed monster in this division – it was me, Wilder and Joshua. And then Ruiz knocked out Joshua and burst that bubble, broke him in. And then I broke in the Bronze Bomber.

“Three became two, two became one and now I’m a standalone soldier. They all need to come through me now and it’s not an easy task because I guard the gate.” 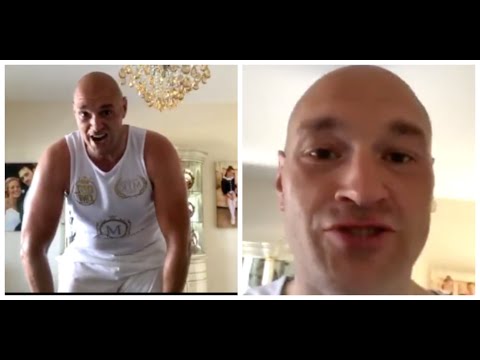 In the recent past Fury has speculated about the potential for retirement sooner rather than later, but now he appears to be relishing his trade and looking forward to plenty more fights in the future.

“Initially I had three fights left on my contract – I’ve got two left on it now, I’ve got Wilder and I’ve got Joshua. But I’m just gonna keep going because there’s nothing else to do is there really? For me, I’m 31 years of age, fit as a fiddle, in great mental spirits. I train every day three or four times a day for bantz. What else am I gonna do with my life?