Eddie Hearn says Tyson Fury is “more than welcome” ringside for Anthony Joshua vs Kubrat Pulev, and hinted that a Fury vs Joshua showdown could be announced next week.

He knows that victory should clear the path for the unification showdown with Fury that the whole of Britain craves. The pair have agreed in principle the financial structure of a two-fight deal.

Hearn, speaking after Billy Joe Saunders’ defeat of Martin Murray on Friday night, emphasised that he’d love to have Fury ringside next weekend.

He told IFL TV: “There were some rumours that some of the broadcasters were talking about it. He’s more than welcome, I think it would be great to have him here.”

Hearn and Fury’s co-promoter Bob Arum have constantly stressed that Fury vs Joshua shouldn’t be difficult to make, assuming Joshua defeats Pulev. And the Matchroom supremo dropped a sizeable hint that an announcement could be just days away.

“Hopefully there’s a few things going on behind the scenes that we can finalise that fight. Be great to announce it next week, wouldn’t it? 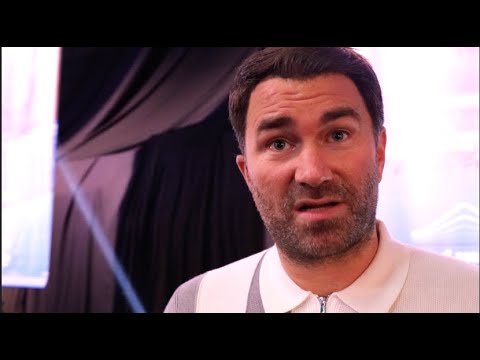 Joshua goes into the Pulev clash as short as 1/12 with the bookmakers to improve his record to 24-1. Pulev (28-1) is now 39 and was crushed by Wladimir Klitschko in his previous world title challenge some six years ago.

It is expected that Fury and Joshua will fight twice in 2021 assuming all goes to plan. The first fight would likely be in summer with the rematch later in the year.

The venue is a political hot potato, with British fans clamouring for a huge outdoors showdown at somewhere like Wembley Stadium. But the cold hard economic reality means the bout could end up overseas if a country puts up a huge site fee.