Joshua vs Usyk will be signed this week – Hearn

Eddie Hearn is confident Anthony Joshua vs Oleksandr Usyk will be signed this week with the bout likely to take place in London’s Tottenham Hotspur Stadium in September.

AJ of course had been planning to meet fellow British world heavyweight champion Tyson Fury in Saudi Arabia on August 14. But within the space of 24 hours the biggest fight in British boxing history fell apart in incredible fashion.

An arbitration ruling in the United States stipulated that Fury must instead face Deontay Wilder in their trilogy fight – the date is now set for July 24 in Las Vegas.

That left Joshua (24-1) looking for an alternative dance partner, and it appears that will be former cruiserweight king and WBO mandatory challenger Usyk (18-0). AJ’s IBF, WBA and WBO heavyweight titles will be on the line.

Hearn confident on Joshua vs Usyk

Negotiations have been ongoing now for a couple of weeks, and Hearn is confident that a deal will be reached this week.

He told the DAZN Boxing Show: “I can tell you that I believe this week we will confirm – because I know Alex Krassyuk (Usyk’s promoter) very well and I know team Usyk very well – this week that fight will be signed I believe for Joshua vs Usyk. 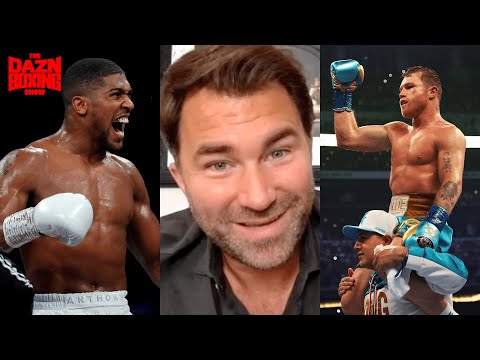 Hearn said Joshua deserves massive props for being welling to fight anybody – his resume is stacked with elite heavyweights already. And Usyk adds just another dangerous foe to that powerful CV.

“Give AJ credit. I always bang on the drum about this young man being willing to fight everybody,” said Hearn.

“Everyone from Klitshko to Takam to Parker then Povetkin and then Ruiz and Ruiz and then Pulev now Usyk. This is an incredible run.”

Joshua vs Usyk is the last fight on AJ’s existing UK broadcast deal with Sky Sports. There is likely to be a massive bidding way for his services after that, with DAZN now having a five-year deal with Hearn’s Matchroom in the UK.

AJ isn’t part of that new Matchroom deal, but it is expected that DAZN will make a major play to entice him into a global deal. His fights already air on DAZN outside the UK.