Oleksandr Usyk’s promoter says he doesn’t think his fighter will step aside for money to allow Tyson Fury vs Anthony Joshua – and that the Ukrainian star has his own undisputed ambitions.

The classy southpaw (17-0) ruled the cruiserweight division in brilliant style before stepping up to boxing’s marquee weight class last October with a victory over Chazz Witherspoon in Chicago. And now he is the mandatory contender for Joshua’s WBO title – with the governing body stating categorically that AJ must face him after negotiating his IBF mandatory against Kubrat Pulev later this year.

That of course throws a(nother) potential spanner in the works for the hoped-for Fury vs Joshua double-header next year – at best likely pushing those fights back.

Amid all the political confusion (nothing new for boxing), Usky’s promoter Alex Crassyuk (of K2 Promotions), joined Boxing Social to explain the current position, and how we got here.

He said: “The situation hasn’t changed much since last year. Usyk was nominated the mandatory for the WBO heavyweight and since that time he keeps his position. He relinquished his super champion position (at cruiserweight) to become the mandatory in heavyweight. He had the fight in heavyweights last October (against Witherspoon) and now he’s training hard and waiting for the time for the announcement of his fight with (Dereck) Chisora.

“His position is he’s the official challenger, the official contender for Anthony Joshua at this moment, or whoever turns out to be after Joshua faces Kubrat Pulev. So nothing has changed much.”

Crassyuk also explained the WBO rule which allowed Usyk to become the mandatory for the heavyweight title as soon as he stepped up to the division.

“There is a position in the WBO – even here in the Ukraine many people ask me to explain the road, the  way Usyk made to become the mandatory for heavyweight without any steps in the ring. When the super champion relinquishes his title and moves up to the next division, he has the right to be nominated as the mandatory challenger immediately. That’s nothing really special for the WBO because some other guys move like that. That’s exactly how Usyk made it.

“When we decided to vacate the WBO super championship position (at cruiserweight) the WBO board voted positively for nominating him the mandatory for Anthony Joshua. 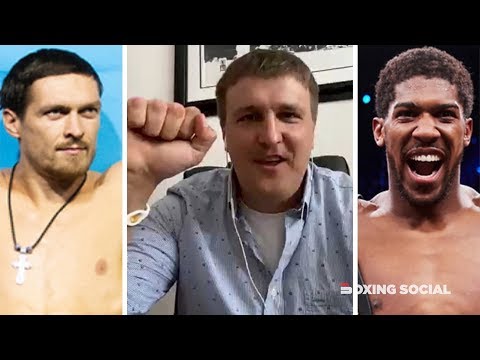 “This is the rule, this is not our imagination or something we invented. This is the rule that should be observed and followed. This is why Usyk sacrificed his undisputed championship, he vacated it and now someone else is the champion in WBO cruiserweight. So Usyk paid his price to become the official contender for the heavyweights.

“So when Paco (Valcarcel, WBO President) says things he just announces the official position of the governing body, and our position remains absolutely the same.”

Crassyuk believes his fighter has been extremely accommodating to the governing bodies already in waiting his turn, but says after Joshua faces Pulev he needs to get his shot.

“We had some kind of misunderstanding at the beginning of this year when Joshua had two obligations, in IBF and WBO,” he said.

“And the reason why Pulev was chosen as the first option was we agreed we are not putting any pressure, we are allowing it to go its way, and immediately after Joshua faces Pulev, Usyk is the next option for him. Regarding the huge unification fight between Tyson Fury and Anthony Joshua, it should happen, definitely should happen, and as a fan of boxing I want to watch this fight as well. But there are some short remarks I want to make:

“Like Joshua, Fury has his obligations with his mandatory – he needs to face the mandatory to become the WBC real champion. The real champion is the guy who defended his title not in a voluntary defence but with the official contender. With Joshua, he became the champion in his last fight, so he has to prove his position as the unified heavyweight champion with a mandatory challenger. With Kubrat Pulev, and he has to face Oleksandr Usyk as well.”

While all the talk in the UK is of either Fury or Joshua becoming the undisputed heavyweight king next year, Crassyuk says they don’t have a monopoly on that ambition.

He explained: “The other thing that I want to say is that the ambition to become the undisputed heavyweight is not just the ambition of two British guys – the ambition of a Ukrainian guy is the same. The only difference is that between Joshua and Fury is Usyk claims the historical right to become the undisputed in two divisions – in cruiserweight and heavyweight. He lives with it, he trains for it, puts all his efforts into it. It’s not a dream – it’s his goal now. He wants to become undisputed in heavyweight together with cruiserweight. As his promoter I need to serve his interests and it’s very easy when we have governing bodies and regulations and it allows Usyk to face the champion and become the champion and unify the belts.

“It’s history in the making. Step-aside money, what do you think? Would any normal ambitious athlete step aside from his dream that became the goal now? I don’t think so, it’s not a matter of money, it’s a matter of legacy.”

First of all, before any title shot, Usyk is hoping to just get back into a boxing ring after the COVID-19 pandemic. Currently his team are trying to finalise a date and venue for the showdown with Chisora (32-9).

“We are looking for the final date and the place where this will land. So it should take place somewhere in August or September, somewhere on the Planet Earth – you know what I mean,” said Crassyuk.

“Usyk doesn’t care where this fight gonna be – UK, US, New Zealand, Australia, Japan or whatever. Everything is accepted as well as whether there is gonna be anyone in attendance. He doesn’t care.”