It’s finally on, the lengthy negotiations are over, and Joseph Parker vs Junior Fa is confirmed for Friday December 11.

The huge domestic heavyweight showdown will be arguably the biggest fight in New Zealand history and will take place at the Spark Arena in Auckland (live on DAZN in the United States and Spark Sport domestically, UK TV to be confirmed).

Former WBO world heavyweight champion Parker (27-2 with 21 wins inside distance) is still ranked number 3 by the governing body. Fa meanwhile is ranked 6 by the same organisation.

Parker lost his title in a points defeat by Anthony Joshua in Cardiff in 2018.

His only other defeat came again on points to Dillian Whyte, also in 2018.

There is already a past for Parker and Fa, the pair having met multiple times in the amateurs.

Parker said: “Junior and I have history, four fights in the amateurs – two wins each.

“I respect Junior a lot, he’s a good fighter. A lot has happened since then, the professional game is a lot different. 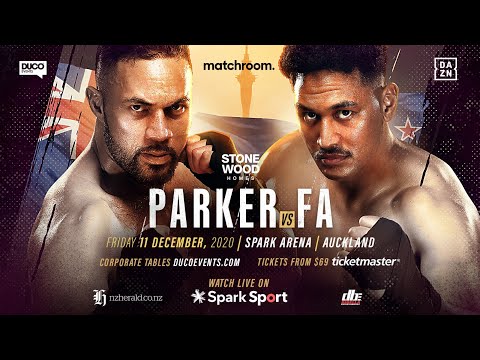 “We’ve both achieved a lot, he’s got a good team behind him and I’m really excited about this fight.

“Who would have thought these two New Zealanders living not far from each other would rank in the top 10 in the world.”

The time is right for Fa

He made the headlines by revealing Wilder had been injured ahead of his loss to Tyson Fury in February.

The clash with Parker has been a long time in the making, as Fa himself admits.

“I’ve wanted this for a long time but I was very honest with myself,” said the 30-year-old.

“I needed to work myself up so it was more of a respectable fight when we do fight.

“I didn’t want it to be Joseph Parker vs this random guy.”

Parker vs Fa a global event

Parker’s manager David Higgins says the bout, tagged New Zealand’s ‘Fight Of The Century’, will also draw huge interest from around the world.

“This particular matchup believe it or not will be a global event, could be watched by a billion people in 100 countries,” he said.

“We’ve had to negotiate and get the backing of Eddie Hearn’s Matchroom Boxing – that’s Joseph Parker’s promoter – and they’re gonna distribute the event globally on live television.”